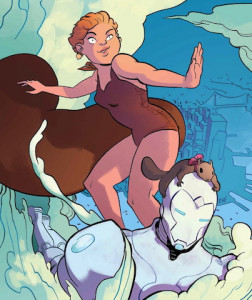 Here’s what’s of interest from Marvel for February 2015. A full list of solicitations may be found here.

“Ms. Marvel” is Valentine’s Day themed this month… with the special guest villain Loki. I wonder if it’s to cash in on the popularity of Loki’s live-action actor Tom Hiddleston?

Reflecting Disney now owning “Star Wars,” as well as having a Star Wars movie due out at Christmas next year, there’s a new comic starring Darth Vader.

Also getting her own comic: Gwen Stacy as “Spider-Girl,” spinning out from the “Spider-Verse” crossover. Another woman getting a Spidey-related spinoff is “Silk,” who supposedly was bitten by the same spider that bit Peter Parker. Pretty sure there must be a bunch of previous stories showing what happened just after the spider-bite that says otherwise, but this came from their recent “Original Sin” story, some retcon-heavy storyline that was meant to show some secret (the aforementioned “sin”) that happened in every hero’s life at some point. Uh-huh.

The new female Thor is getting her first annual already, featuring her plus flashback stories to the original Thor. (A pro wrestler is guest-starring?!)