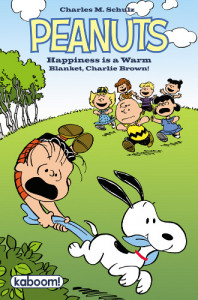 Boom Kids!, the all-ages imprint of Boom! Studios, has now renamed itself “kaboom!” Kaboom! will continue to publish child-friendly titles, including the non-Pixar Disney comics line (the Pixar comics have moved to Disney-owned Marvel Comics).

One of kaboom!’s new titles is a graphic novel adaptation of a new “Peanuts” animated special, “Happiness is a Warm Blanket, Charlie Brown.” This special debuts on DVD March 29, and is based on a series of 1960s era “Peanuts” strips. To that end, Charlie Brown, Snoopy, Linus, etc. in the graphic novel (and animated special) will be drawn reflecting Charles Schulz’s 60s drawing style. The hardcover graphic novel is 80 pages, long, will retail for $20, and is co-written by Stephan Pastis, the creator of comic strip “Pearls Before Swine.”