It’s time for another package show look. This time, it’s the short-lived 1977 series “The Skatebirds,” an hour-long show that aired on CBS for a single season of 16 episodes.

Trying to imitate the success of 1969’s “The Banana Splits,” Hanna-Barbera gave the mix of live-action and animation another go, featuring as segments: “The Skatebirds,” “Woofer & Wimper, Dog Detectives,” “The Robonic Stooges,” and “Mystery Island.”

After a half-season, “The Skatebirds” proved a ratings miss, and was yanked from the schedule. It returned for the following season, but cut down to a half-hour of reruns, with “The Robonic Stooges,” and “Woofer & Wimper” spun off into their own separate show. Wikipedia states “The Skatebirds” aired under this format until 1981 on Sunday mornings. The current syndicated version (used since the 80s) features as segments the birds themselves, “The Robonic Stooges,” and “Wonder Wheels.”

The Skatebirds were live-action segments and wraparounds, featuring a group of live-action costumed birds on roller skates. The birds in question were Knock-Knock, a woodpecker; Satchel, a pelican; and Scooter, a penguin. The three would deal with their nemesis, Scat-Cat, a cat. Veteran voice actors Lennie Weinrib, Bob Holt, Don Messick, and Scatman Crothers voiced the above four respectively. 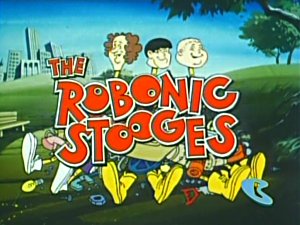 While Hanna-Barbera had used the Three Stooges before (they’d previously made a cameo on “The New Scooby-Doo Movies”), this was their most extensive use of the classic comedy trio. Presumably, someone wanted to cash in on “The Six Million Dollar Man” given these shorts’ (admittedly odd) premise.

In this series, Moe, Larry, and Curly are extremely inept robot superheroes, working for a superhero agency and a boss (“Agent 000”) that clearly was at the limit of his patience with the Stooges’ bumbling. Why someone thought it’d be a good idea to create robotic superheroes based on, well, the Three Stooges, isn’t explained. However, the final episode, a clip show titled “Stooges, You’re Fired,” suggests someone finally had second thoughts.

Given Saturday morning limits on violence in the 1970s, some of the more violent classic Stooges slapstick isn’t seen here. Instead, it’d often be Moe chasing Larry and Curly around or berating them, plus the usual pratfalls, crashing into things, cartoon gags, etc.

As noted above, the Stooges got briefly spun off into their own half-hour in 1978, paired with “Woofer & Wimper.” It eventually was folded back into the syndicated “Skatebirds” package, where it remains to this day, though the individual shorts occasionally have aired on Boomerang.

Willie Wheeler, a milquetoast teenage reporter, and his run-down motorcycle transform at the push of a button into superheroes. Specifically, said motorcycle turns into the Speed Buggy-esque super-high tech “Wonder Wheels,” while Willie gets a lavish Evel Knievel-esque costume.

“Wonder Wheels” has stayed as part of the “Skatebirds” syndicated package, though the shorts by themselves have aired on channels like Boomerang. 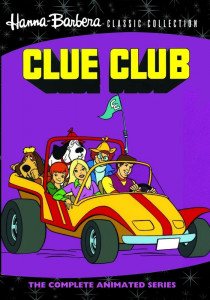 “Woofer & Wimper, Dog Detectives” is a shortened version of the half-hour 1976 series “Clue Club.” “Clue Club” was one of the various Scooby-Doo take-offs Hanna-Barbera produced in the 70s. This one featured four teenage siblings/friends, plus their two pet dogs Woofer and Wimper. Unlike most variations of the Scooby-Doo formula, Woofer and Wimper could only talk to each other (or break the fourth wall), not to other humans. “Clue Club” ran for 16 episodes; the shortened episodes here emphasized the comedy relief canines.

A live-action segment about three young people and their robot POPS, whose plane is forced to land on an island by an evil scientist. Said scientists wants to capture POPS as a key component of his plan for world domination.

Wikipedia says “Mystery Island” aired as part of “Captain Caveman and the Teen Angels” airings on Boomerang in the mid-2000s. That’d explain the Boomerang logo in the clips I found online.

“The Skatebirds” isn’t on DVD or digital video, nor most of its individual segments. The only exception is “Woofer & Wimper”; the original half-hour “Clue Club” is on DVD through a Warner Archive release.