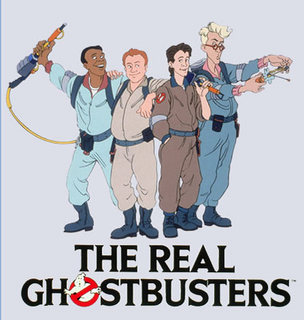 This week’s minorities in cartoons entry is yet another 80s pop cultural item: the animated series “The Real Ghostbusters.” Running from 1986 to 1991 on ABC, the series was based on the popular 1984 movie “Ghostbusters” (and its 1989 sequel “Ghostbusters II”).

The series continues the adventures of the quartet of heroes (Egon, Ray, Peter, and Winston) from the original film, as each episode sees them deal with some particular supernatural threat. The writing of the series managed to be fairly strong for its time, which aided its success; J. Michael Straczynski of “Babylon 5” fame served as story editor.

Since “The Real Ghostbusters” was a TV series, there was also room to give more of a backstory for each of the characters, including African-American Ghostbuster Winston Zeddemore.

As the series went on, we learn (among other things): Winston’s father runs a construction business; Winston enjoys reading mystery novels; and that Winston’s the reincarnation of an ancient African shaman (who’d fought an also-ancient evil spirit).

After the end of the series, Winston and the other Ghostbusters remained unseen for some years (merchandise aside), until 1997’s “Extreme Ghostbusters.”

The series finale sees Winston, Ray, and Peter return for a reunion. The original team ends up in a Justice League/Justice Society-style team-up with the younger Ghostbusters for a mission.

Various parodies of “Ghostbusters” have made note of Winston being the only non-White Ghostbuster in the original 80s films. For instance, 90s animated series “The Critic” saw Jay Sherman on board to write a sequel to his world’s version of “Ghostbusters” in the episode “L.A. Jay.” When Jay asks the casting staff who’s back from the original cast:

“Uh…the Black guy!” “But we only have him for two days…he’s also playing the Black guy in ‘Batman 3’.”

Later, one of the directors Jay interviews (a Spike Lee parody) notes: “your first problem is you’ve got a White ghost! How come there’re never any Black ghosts?!”

For the record, there’s Bill Cosby’s 1990 movie “Ghost Dad.” Nickelodeon also has a sitcom called “The Haunted Hathaways,” about a family of African-American ghosts sharing a house with a mortal family.

Winston’s animated self was originally voiced by Arsenio Hall. Live-action “Ghostbusters” actor Ernie Hudson had tried out for the part of his own character, but for some reason, the studio favored Arsenio.

After a few seasons, Arsenio was replaced by Buster Jones (the voice of Black Vulcan in “Superfriends”) for the remainder of the series and in Winston’s cameo in “Extreme Ghostbusters.”

Hudson, however, finally got to voice Winston in the 2009 video game “Ghostbusters: The Video Game.” Set some years after the events of “Ghostbusters II,” we learn that Winston finally has a doctorate, like his fellow Ghostbusters, though it’s not clear when Winston earned it. (Quote from the game: “That’s Doctor Zeddemore to you!”)

Finally, here’s the opening credits to “The Real Ghostbusters.”

If you’re wondering why the “Real” part of the show’s name: Filmation (the studio behind “Fat Albert“) had made an unrelated-to-the-movie series with the plain name “Ghostbusters,” to cash in on the movie’s success. (Filmation had also produced a live-action series titled “The Ghost Busters” in the 70s; the 80s series revived the same characters.) Thus, “The Real Ghostbusters” name is a jab at their one-time rival show.