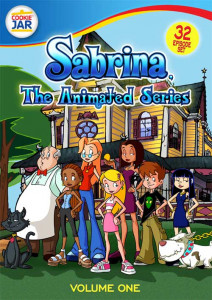 Archie as of May is reverting its regular comics’ logo designs back to their old-time look, with the logo having a solid background behind it. See this link for an example:

It’ll certainly make it stand out on the comics stand/newsstand, given there won’t be any other covers resembling it. Though it doesn’t leave as much room for the artwork; I wonder what the Archie artists will make of that. (Speaking of the artwork on that upcoming Archie cover: one of those “lost tribe” teenagers resembles the teenaged version of Pebbles Flintstone… well, if Pebbles were dressed for the beach, maybe).

The second news item: the late 90s/2000s animated version of the “Sabrina the Teenage Witch” sitcom, “Sabrina, the Animated Series,” is getting two DVD releases in February. One is a ten-episode release on a single disc for $10, but the better buy is 32 episodes (half the show’s original run) on a several-disc set for $15. I assume if this sells well (which it might—32 episodes for a $15 retail price is pretty cheap), the second half of the episodes will come out, as well as perhaps the followup series “Sabrina’s Secret Life.” Besides the series currently airing on CBS Saturday mornings, the series’ short-lived comic version is still reprinted in Archie’s digests, presented as flashback stories about Sabrina’s junior high years. The only animated series element to spill over permanently to the present-day-set Sabrina comics is the show’s name for her hometown, “Greendale” (a town located within driving distance of Riverdale).