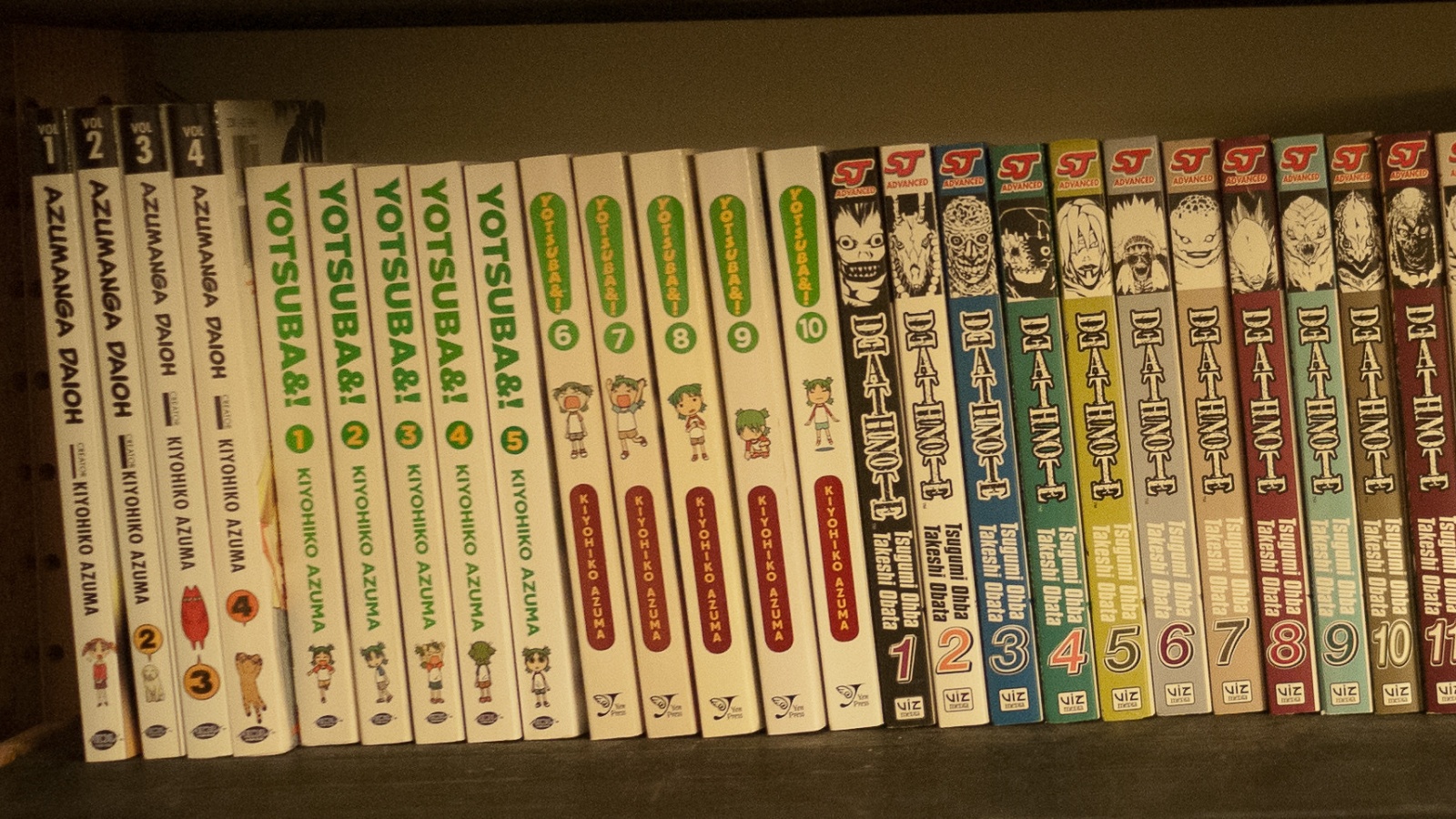 Comichron and ICv2 have released their annual joint analysis of the North American comic sales market. For 2021, things rebounded from the 2020 pandemic shutdowns in a massive way, with almost all categories seeing a rise in sales. 2021 comic sales reached a record high of $2.075 billion, up 62% from 2020 and up over 70% from 2019, the last pre-pandemic year. Since 2020 wasn’t a typical year, I’ll be comparing some things below to 2019.

The past several years of changes in the direct market and in BookScan data led to Comichron making a few adjustments in how they analyze data. However, the usual criteria (and caveats) still apply: 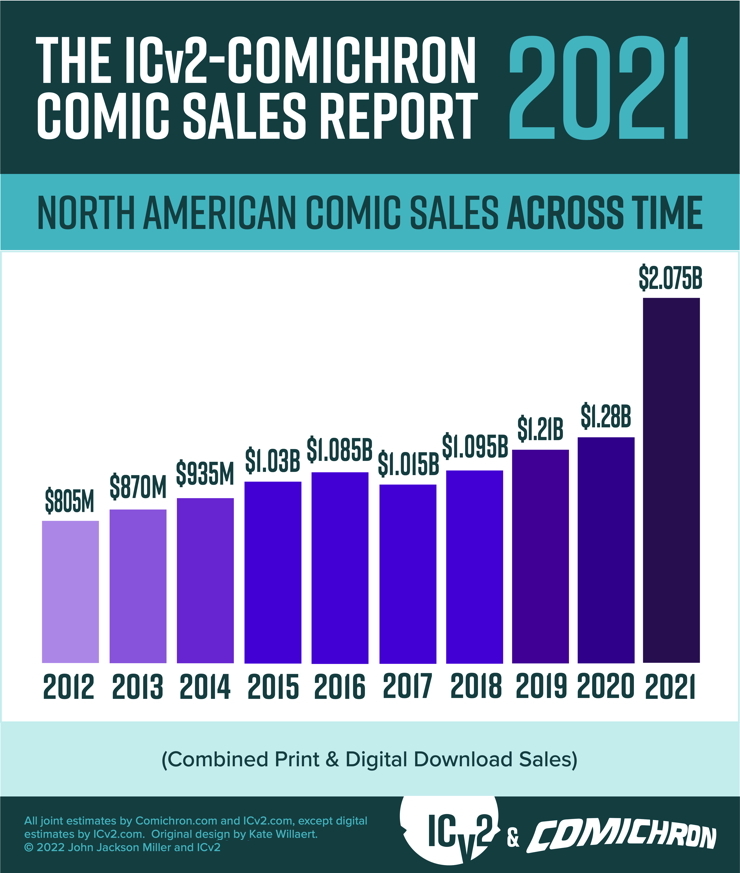 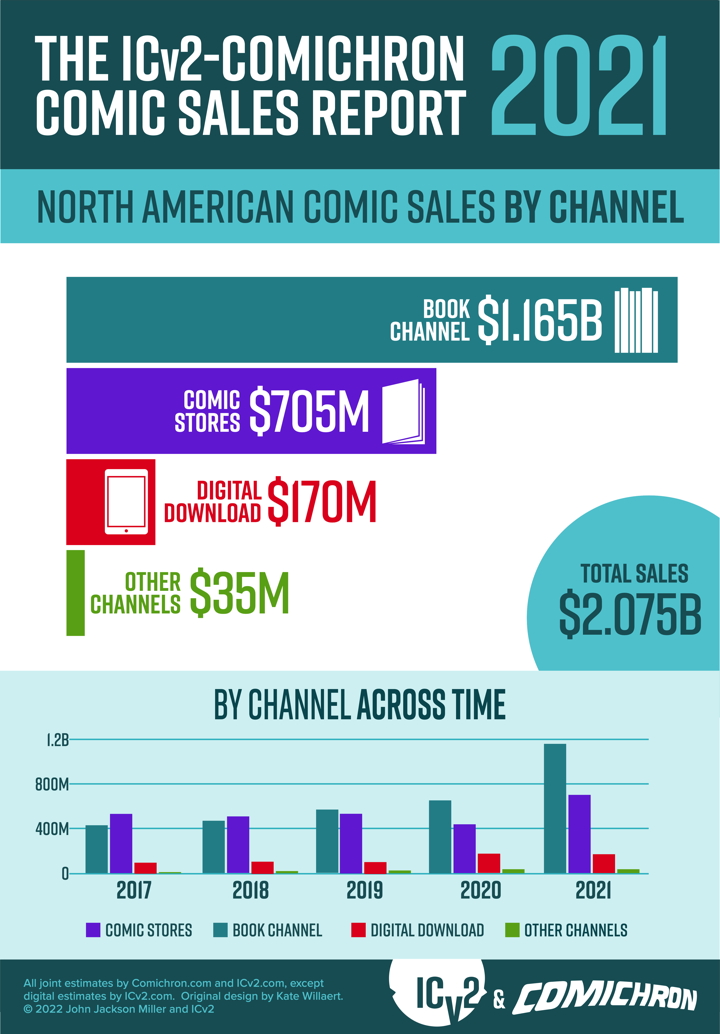 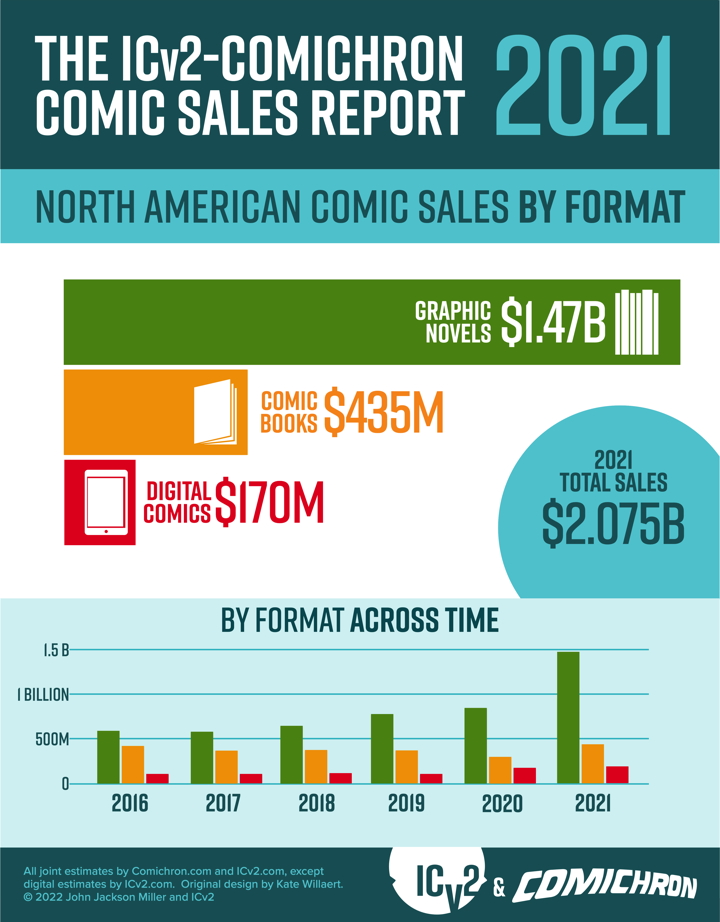 Below, I break down the infographics’ figures by percentages. Note all of these figures have some rounding.

Channel changes (by percentage) from 2020:

Format changes (by percentage) from 2020:

Channel changes (by percentage) since 2019:

Format changes (by percentage) since 2019:

Almost all categories saw a jump in sales. However, it’s graphic novels that were the runaway success. Sales in that category alone, at $1.165 billion, roughly matches what the entire comics industry earned in 2019 and 2020. Sales for graphic novels have almost doubled over 2019, the last pre-pandemic (and pre-direct market changes) year. All of this definitely shows the popularity of graphic novels and manga.

As has been the case for some years now, graphic novels hold a majority of comic sales. While they also bounced back from 2020, traditional pamphlet comic books only hold 21% of sales. That said, dollar-wise, single-issue comic sales are the highest they’ve been in years.

That said, comic shop sales have gone up as well. Hopefully, they’ve recovered from the worst of the pandemic shutdowns; independently owned outlets (like most comic shops) are still important.

Digital sales are up, but what about its post-Comixology-“revamp” future?

Digital comic sales are also doing well. Again, the numbers don’t include subscription services like Marvel Unlimited, which is where I think most of the digital action lies.

That said, I suspect next year’s figures might be impacted, thanks to Amazon’s inept overhaul to Comixology driving off some readers from buying digital comics. While there are some digital comic alternatives, none of them are quite the same one-stop experience Comixology offered.

How well did DC and Marvel (and Viz/Scholastic) do overall?

While Comichron and ICv2 didn’t break down sales by publisher, I thought I’d make a very rough guess on how DC and Marvel (and book channel “Big Two” Viz and Scholastic) did in 2021. Note this isn’t perfect (and someone can correct me if I’m wrong), but it’s my best estimate.

To show my math:

My results (with rounding):

So overall, while Marvel and DC are technically still the “Big Two,” it’s only thanks to the direct market, and only as a plurality of sales. At this point, about $2 of every $3 in comic sales are going to something that isn’t published by DC or Marvel. If 2022 turns out like 2021, I can see Viz easily being in the #2 spot next year.

Again, feel free to correct me on any of this in the comments.

Manga not “real comics?” DC/Marvel sales harmed by being “woke?” Um, not quite

Some insist manga shouldn’t count toward sales since those comics aren’t made in the US. Of course, that’s a silly idea; “My Hero Academia” is as much a comic as “The X-Men.” Nielsen TV ratings don’t exclude anime (from Japan), “Paw Patrol” (from Canada), or “Doctor Who” (from the UK), just because those shows aren’t made in the US. Granted, part of this anti-manga sentiment is probably driven by racism/xenophobia.

As for the idea of superhero comics being “woke” harming sales: DC and Marvel books have plenty of problems, but having main characters who aren’t White, male, cisgender, and/or heterosexual isn’t the source of them. Besides, aren’t most superheroes supposed to be fighting for justice? It’s literally in the name of DC’s top superhero team! Still, “I don’t want to see social justice warriors in a comic about a superhero team literally named the Justice League of America” is quite a take.