Many people are concerned about their social media followings, and this also extends to politicians. Famously (or infamously), there’s Donald Trump’s Twitter presence. However, most other politicians have also made a home on Twitter.

Below is a look at some politicians’ presence on Twitter. 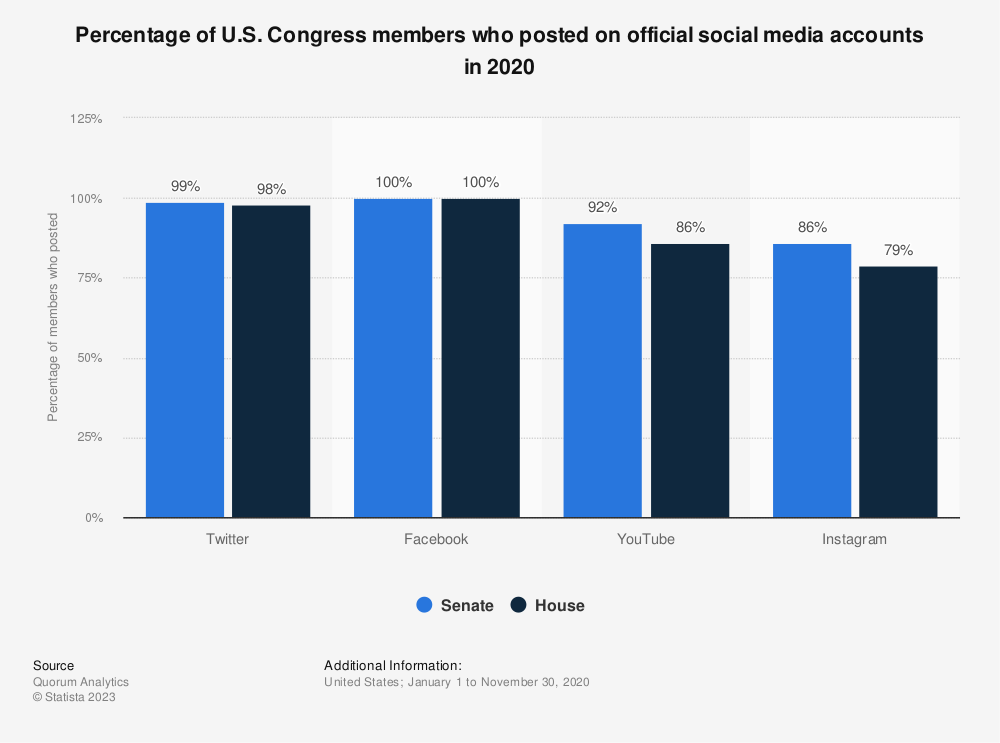 As the above chart shows, at least in the United States, social media is dominated by the two most famous social networks, Facebook and Twitter. Meanwhile, Instagram doesn’t seem quite as prominent.

It’s unsurprising that Twitter’s become a favorite for politicians. For one, it’s an immediate way to let one’s thoughts known in a short fashion. There’s also no journalists asking annoying questions.

The most followed politician (current or former) on Twitter is former president Barack Obama. At 106.7 million followers (as of June 2019), he’s also the second-most popular person on Twitter period, just behind singer Katy Perry.

Meanwhile, current president Donald Trump trails by some distance. Trump’s personal Twitter account has about 61.3 million followers, while the official POTUS account has 26.2 million followers. Yes, despite being out of office over two and a half years, Obama still has more followers than Trump’s two accounts combined.

On a global scale, below are the top 10 most followed political world leaders on Twitter, according to CEOWorld magazine:

Note most of the politicians in the top 10 hail from Asia or the Middle East. (Modi, at #3, is the current Prime Minister of India.) Not surprising given population sizes, though it shows how popular Twitter is around the world.

The most followed US House of Representatives member on Twitter by far is Alexandria Ocasio-Cortez. She’s a first-year representative; as of this writing, Ocasio-Cortez has about 4.7 million followers on her personal account. The most followed Republican, meanwhile, is fellow first-year House member Dan Crenshaw, who has about 525,000 followers. (Unfortunately, I couldn’t find Senate numbers.)

Of interest is who Congress themselves follow on Twitter. The Huffington Post ran an analysis back in January, and it shows things tend to be split along party lines. The most followed media outlets by Republicans, for instance, are: Fox News, Politico, The Hill, Roll Call, and the Wall Street Journal. Rupert Murdoch-owned outlets clock in in three spots in the top 10, counting the Wall Street Journal.

Meanwhile, for Democrat Congress members, the top five accounts followed are: the New York Times, Politico, the Washington Post, the Associated Press, and The Hill. NPR- and CNN-tied accounts appear twice apiece on the list.

How to block Twitter trolls in bulk
How to put social network buttons in your WordPress sidebar
What are the advantages of RSS?
"Steven Universe," "Frontline" episode about Facebook win 2019 Peabody Awards
Share this post