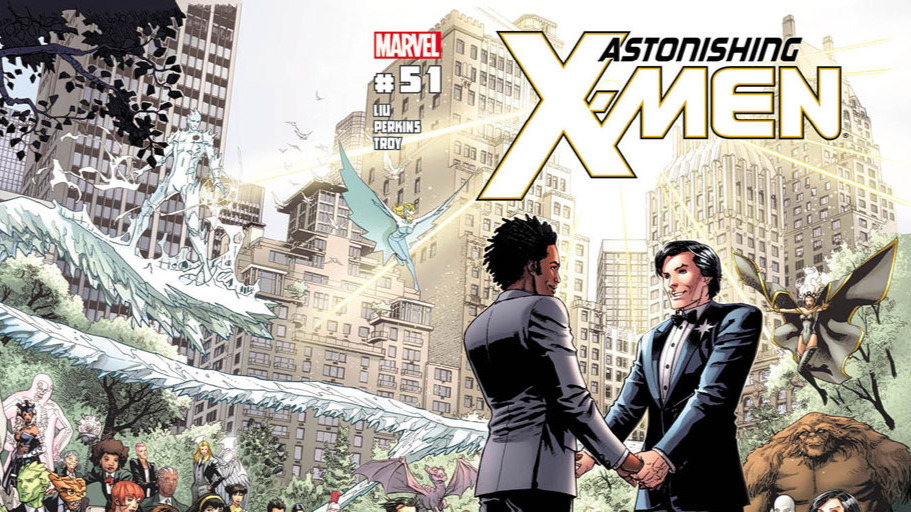 A lot’s changed since I wrote a 2013 post about same-sex marriage depictions in cartoons. For starters, the United States Supreme Court issued a ruling in 2015 that legalized marriage nationwide. There’s also been an increase in same-sex weddings in comics and (to a smaller degree) animation, including better-done examples than the ones I used in my old post. (Sorry, “Simpsons”/”South Park.”) Thus, time for a newer post.

As such weddings are often part of long-running plots, expect *SPOILERS* below.

In “Life With Archie” #16 (February 2012), the adult version of Kevin Keller marries Clay Walker, an African-American military doctor Kevin meets during recuperative therapy. The wedding happens in both of that series’ alternate futures (the Archies-marries-Betty and Archie-marries-Veronica ones).

In real life, the storyline saw protests from One Million Moms, who hated that Toys R Us (when that was still in existence) carried the comic. Despite their protests, the book sold out; a later issue of Kevin’s solo comic also made fun of the group.

“Dykes to Watch Out For”

Originally, the two held a commitment ceremony. Later, Toni and Clarice had a civil union in Vermont (after civil unions were legalized there). Finally, they made an unsuccessful attempt to get married at City Hall during a brief period when same-sex marriage was legal in their state. (This was a reference to when San Francisco briefly allowed gay marriages in 2004.) That said, it’s never been stated in what state the strip is set.

Ironically, despite the multiple ceremonies, the two would later divorce.

Northstar is one of the most famous openly gay superheroes. As such, Northstar’s wedding to his partner in “Astonishing X-Men” (vol. 3) #51 (August 2012) got some amount of publicity.

Being a superhero comic wedding, the issue also got some special treatment, namely a wraparound cover showing the attendees.

“A Couple of Guys”

The now-defunct webcomic (which ran from 1996 to 2018) saw lead characters Eric and Joey originally were married in Massachusetts (after same-sex marriage was legalized there), but later renewed their vows in their native New York City. The latter was a double ceremony—their neighbors and friends Sue and Simone decided to get married, as well.

Apollo and Midnighter are two heroes whose shtick is being openly gay, “darker and edgier” versions of Superman and Batman respectively. The two also are quite dedicated to each other; this led to the two marrying in “The Authority” #29 (July 2002). The blog Women Writing About Comics has a review of this story.

The marriage was one of numerous ones retconned out of existence with the New 52 reboot in 2011. DC feared marriage would make characters look “old,” and later vetoed Batwoman marrying her girlfriend, declaring heroes “couldn’t be happy.” All as foolish and adolescent as it sounds.

Some other comics featuring same-sex weddings:

I’ve written previously about “Arthur”‘s 2019 wedding between Mr. Ratburn and a newly-introduced character, a chocolatier.