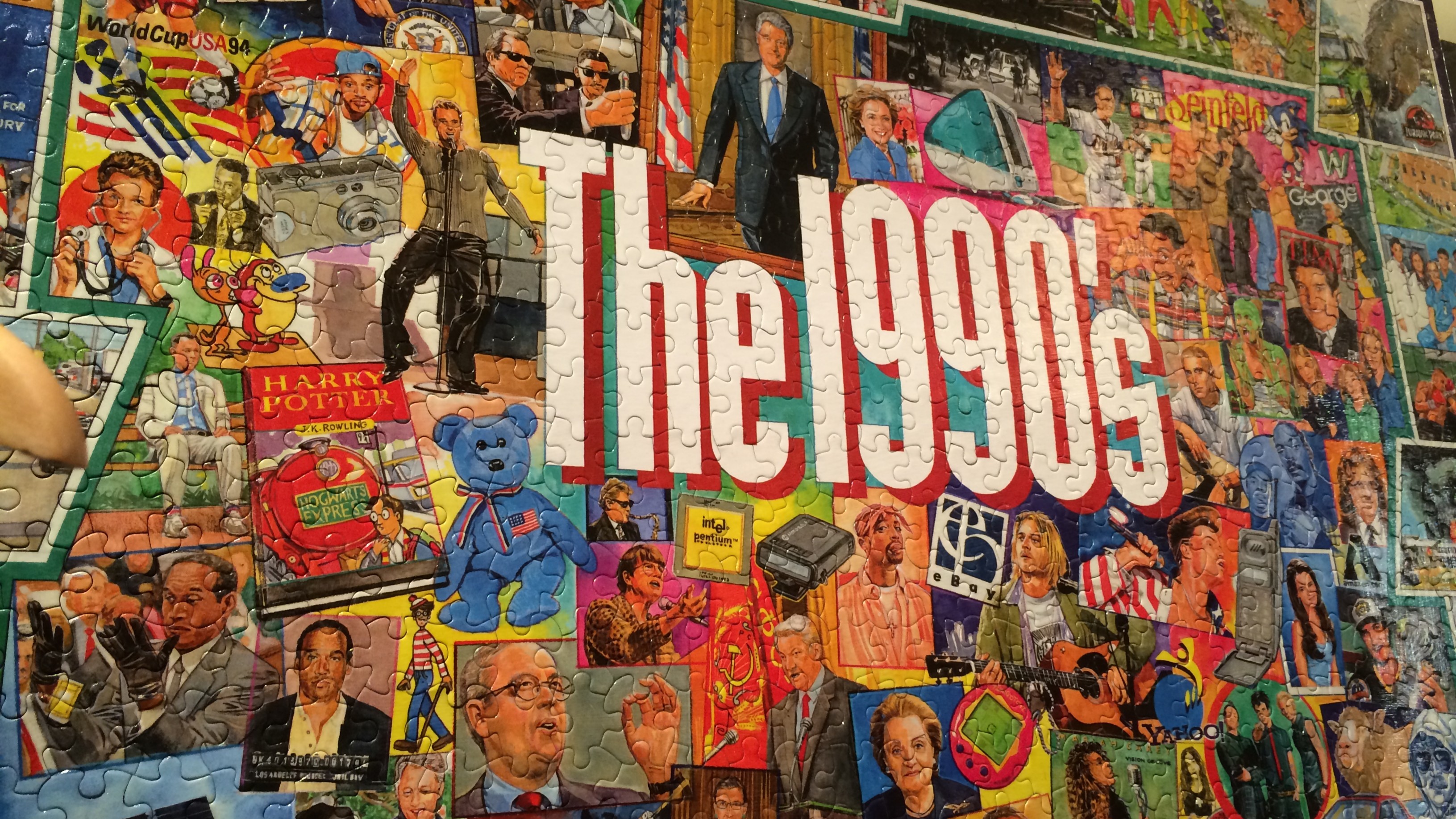 On the heels of my posts about the 1970s, 1980s, and 2010s comes time to look at the next decade of trends and influences in TV animation: the 1990s. This decade saw a modernization of and great changes in animation, and of course had its own trends.

While I mention “the 1990s,” the decade’s TV animation trends are probably defined as starting in 1990 (the debuts of “The Simpsons” and “Tiny Toon Adventures”). As for when the nineties’ trends ended, I’d propose either:

“The Simpsons” is without a doubt the decade’s most popular and influential TV cartoon. One of its biggest influences is popularizing a heavier amount of pop culture references and satire in animation. Various animated cartoons started to feature then-current pop cultural references. The most prominent of these was Warner Brothers’ 1990s TV animation (“Tiny Toons,” “Animaniacs,” etc.).

“Animaniacs” even incorporated such into its theme song—a lyric references then-President Bill Clinton’s saxophone playing skills. A “Pinky and the Brain” episode revolved around the use of a Macarena-like dance for evil purposes. And a fair number of “Tiny Toons” episodes focused on “life in the 90s” (namely the very early 90s, which was still 80s-influenced).

Satire in general also became more prominent, with shows like “The Critic” satirizing popular culture. “South Park” ran with this to a heavier degree.

Satire and pop culture references never went away. However, post-1990s TV animation has greatly pared back on making specific pop culture references. Nowadays, cartoons either avoid such as much as possible, or stick with broader satires/pastiches: “Star Wars,” generic pop music stars not meant to be a specific celebrity, etc.

The problem with making specific pop culture references is that it tends to make the work obviously dated. While “Animaniacs,” “Tiny Toons,” and “Pinky and the Brain” are well written shows, a lot of the jokes (and episodes) look increasingly dated as the years roll on. Although Looney Tunes used its share of pop culture references, the 90s WB cartoons seemed to lean much more heavily into them. (A whole “Pinky and the Brain” episode parodied the 1971 film “Billy Jack,” of all things.) This might be one factor in why the 90s WB cartoons have vanished from TV (streaming services aside) since the Clinton administration. That said, a reboot of “Animaniacs” is planned for Hulu in 2020.

Ironically, an episode of “Tiny Toons” had Buster and Babs mock “Rocky and Bullwinkle” as full of “dated 60s references” that “won’t have much of a life in reruns.” These days, the moose and squirrel (and their backup segments) are more prominent than the characters that made fun of them, thanks to several film and TV series revivals.

“The Simpsons” also brought forth a revival of the idea of adult-oriented animation, or producing more cartoons that appeal to all ages. This was a big shift from the “cartoons are for kids” mindset of previous decades.

In the Springfield gang’s wake came a lot of poorly done knockoffs; they mostly rode on: “the Simpsons curse and make adult pop culture references, so, uh, let’s make a show with those?”

Shows that tried to cash in on “The Simpsons” included: “Fish Police” (fish cops in an underwater city); “Capitol Critters” (a political satire about mice and other pests living inside the White House walls; extra points off for using cockroaches as African-American “analogues”); and “Family Dog” (a family and the unnamed dog they mistreated).

After the cancellation of the above shows, “The Simpsons” took shots at all of them in a “Treehouse of Horror” episode (putting the shows’ names on tombstones).

Writing for older or all-ages audiences also extended to action shows of the decade. The most famous of these 1990s shows was 1992’s “Batman: The Animated Series,” which combined a more mature writing style with higher quality TV animation.

On cable, “Beavis and Butt-Head” and its spin-off “Daria” were popular. However, the most successful adult-oriented cable cartoon was the 1997 debut of “South Park,” which raised the bar on edgy animation. In 1999, Fox debuted “Family Guy,” a show that became popular in the following decade.

“The Simpsons” isn’t as popular as it once was (for various reasons); however, its influence has led to the bar being permanently raised on TV animation writing. Nowadays, cartoons for adults or all ages are the norm.

Meanwhile, “Family Guy” and “South Park”‘s influence has also affected adult-oriented animation. So has the 2001 debut of “Adult Swim” and the rise of online animation (with YouTube’s debut in 2005).

The rise of cable TV in the 1990s as a source of original programming also extended to animation.

In 1991, Nickelodeon debuted “NickToons,” a block for original animated fare. The block featured the debuts of “Rugrats,” “Doug,” and “Ren and Stimpy.” The cartoons, particularly “Rugrats,” became wildly popular in the 90s, and helped spur the development of other original animation for cable (such as “Beavis and Butt-Head” on MTV).

1992 saw the debut of Cartoon Network. Originally, the network featured a lot of reruns of older Hanna-Barbera animated fare. However, it soon debuted some of its own cartoons, including “Dexter’s Laboratory,” “Johnny Bravo,” and “The Powerpuff Girls.” Of course, those newer cartoons became the norm for the network, and eventual classics in their own right. This led to spin-off network Boomerang debuting in 2000, as a permanent home for most of WarnerMedia’s older animated fare.

The rise of cable is one of the factors that led to the downfall of the traditional Saturday morning cartoon block. A big landmark shift in this was 2000: Looney Tunes, a broadcast TV mainstay for decades, left broadcast TV to exclusively go to cable.

Nowadays, TV animation is dominated by Cartoon Network, Nickelodeon, and Disney Channel, plus their subsidiaries (Boomerang, Adult Swim, NickToons, Disney XD). Fox and PBS Kids are also mainstays, for adult and educational/children’s animation respectively. The latter even has a 24-hour digital subchannel and streaming service.

The rise of CGI animation (“Reboot”)

The 90s saw animation studios switch from using traditional ink and paint methods to computers. However, the rise of 3D computer animation took off with the success of 1995’s “Toy Story.”

1994’s “Reboot” was the first prominent CGI animated TV series. It proved successful enough that some other CGI series came along in the latter half of the 90s. Other shows also switched to CGI animation, including “South Park” (its pilot used stop-motion cut-out animation).

In CGI’s case, there’s also been advances in such technology over the years. This has the consequence of making even the best 90s-era CGI animation look a bit dated.

The 1990s saw TV animation undergo vast changes as part of a renaissance in the medium. “The Simpsons” and other shows permanently raised the bar on writing and animation quality, as well as what types of subjects TV cartoons can show.