“The Simpsons” has been running on TV as a half-hour show since December 1989 (launching with its initial Christmas special), and is now on its 29th season, with over 600 episodes. As the longest-running American primetime scripted program, it’s earned a permanent spot in American popular culture.

That said, the show has received its share of criticism. Apu, the manager of the Kwik-E-Mart convenience store, has garnered more and more criticism in recent years for portraying a stereotypical version of South Asians. In 2017, comedian (and “Simpsons” fan) Hari Kondabolu made for truTV “The Problem With Apu,” a documentary about the impact of Apu on the American public’s view of South Asians.

In response, “The Simpsons” aired an episode this week (titled “No Good Read Goes Unpunished”) that featured Marge trying to edit a book she liked as a child that contains problematic elements. To quote NPR’s Linda Holmes’ article on this:

It gets worse. After Marge asks what she’s supposed to do, Lisa — Lisa! — looks directly at the camera. “It’s hard to say,” she says. “Something that started decades ago and was applauded and inoffensive is now politically incorrect. What can you do?” And she looks at a framed photo next to her bed of Apu, which is signed, “Don’t have a cow. Apu.” Marge puts a hand on her shoulder. “Some things will be dealt with at a later date.” “If at all,” Lisa responds. Both look blankly at the audience.

Online reaction’s been largely negative, with criticism in publications like Entertainment Weekly, CBR, and the UK’s the Independent. The only defenses I’ve seen so far have been from lingering hardcore “Simpsons” fans, those that give the “it’s just a cartoon!” argument, and conservatives pleased at seeing “political correctness” attacked.  None of those are exactly encouraging signs.

The problems with “The Simpsons” itself

I used to be a heavy viewer of “The Simpsons” back in the 90s. Even now, I still consider that era of the show a classic. Still, my viewing of the show waned by the end of the decade, and I gave up watching it around the turn of the millennium. There were still some funny episodes, but the number of bad ones by that point were more than the good ones.

Since around then, the debate’s gone on about the show’s problems, whether or not it should end its run, and so on. Judging from this week’s episode’s response to constructive criticism being a collective shrug, it sounds like I definitely made the right decision.

As for why Homer and company aren’t as relevant or popular as they once were, I’ve got some guesses why:

The show’s been on the air a very long time

Again, the show’s been on the air since December 1989. As such, it’s broken lots of records.

That said, there’s a reason quantity doesn’t automatically equal quality. If the show had ended after its 10th or even 12th season, it’d go out on a higher note than it will now. At this point, it’s now “that show that ran way too long,” versus any pride to be taken in being on the air longer than “Gunsmoke.”

“The Simpsons” has avoided changing anything significant about its characters, setting, etc. as much as possible since it debuted back when Bush Sr. was president. Similar to earlier TV sitcoms (or older newspaper comics), “The Simpsons” exists in an unchanging, static state.

Unfortunately, a refusal to change gives “The Simpsons” a rather conservative image; it also doesn’t help when characters like Apu are similarly frozen. The only major changes have been: a few characters’ deaths (per their voice actors quitting or dying); a few minor character changes (such as Apu getting married); and real-life aspects it absolutely can’t ignore (the presence of the internet, aging voice actors, the show’s switch to high definition, etc.). Otherwise, I’m not sure there’s much difference between a 2018 episode and one from 10, or even 20, years earlier.

In comparison, “Scooby-Doo,” which has a reputation of having a formulaic premise, has gone through multiple incarnations over its lifetime. Versions of the Great Dane’s gang have ranged from standard-issue mystery-solving to Shaggy and Scooby running from real monsters for eight minutes to the gang as pre-teens. They’ve also varied from eight-minute shorts to season-long story arcs. While there’s still plenty of “plain vanilla” versions of Scooby, there’s also a fair number of more adventurous takes.  That’s more than can be said of Springfield. 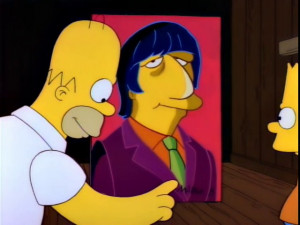 Again, it’s been an entire generation between “The Simpsons”‘s debut and 2018. As such, there’s been a lot of changes, including:

Changes in sitcoms and animation

Finally, there’s been a massive upheaval since the early 90s in the natures of sitcoms and animation. When “The Simpsons” debuted, sitcoms were expected to be episodic, feature limited types of characters, and lack continuity or ongoing plots. The same went for animation; shows like “DuckTales” featured the sporadic multi-part story. But for the most part, cartoons were also expected to be episodic, with minimal or no continuity. After all, they were “just a cartoon,” and only nerdy types cared about things like character development or continuity. (Comic Book Guy on “The Simpsons” is meant to parody geeks interested in or thinking about such things, down to his “worst episode ever” catchphrase.)

These days, sitcoms often feature recurring plots, character development, and other changes as the seasons progress. Different types of families are also present that aren’t just the stereotypical nuclear family or parodies of such.

Similarly, animation’s range of topics have expanded since the Simpsons’ heyday. Animated series often feature ongoing plotlines, characters undergoing some changes, and so forth. The rise of binge-viewing on streaming services probably led to this being feasible and popular.

Since 1989, there’s also been increased diversity expectations in animation, both on screen and behind the scenes. While much more needs to be done (“The Simpsons”‘s staff isn’t exactly the most diverse, which is likely another part of its problems), recent changes in animation are encouraging.  Shows like “Steven Universe” feature same-sex relationships, something even “edgy” “adult” cartoons often still don’t do a good job portraying. (Though Smithers did finally come out in a 2016 “Simpsons” episode.)

Overall, “The Simpsons” was groundbreaking in its day, and it’s offered lots of memorable moments (and quotable lines). That said, the fact it all but shrugged at the idea of doing anything about Apu, plus the show’s other shortcomings and calcified aspects, suggests its day’s finally past.

There’s lots of modern animated programs that feature a diverse range of subject matter; many also offer satirical writing and more modernized treatments of its characters. There’s also finally more South Asian characters appearing in cartoons (and in live-action productions), such as Marvel’s superhero Kamala “Ms. Marvel” Khan. With all of this material available, why settle for the billionth “Homer gets a new job”/”Springfield riots over something”/forced celebrity cameo episode?