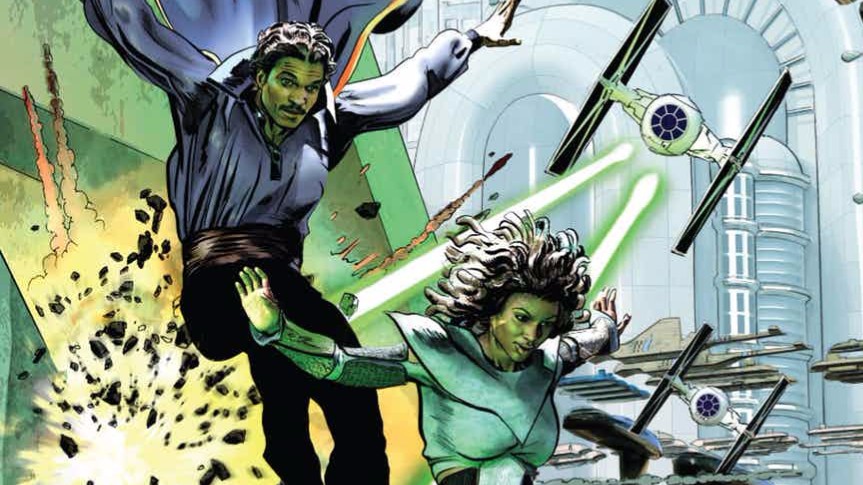 Below are August’s top-selling comics, according to Diamond.

DC’s “Dark Nights” and the usual “Batman” top the list. However, Marvel made up all seven other entries, thanks to the still-lingering “Secret Empire” and a few issues of “Generations.”

The only non-superhero related entries in the top 10 are two issues of “Star Wars.” Both issues feature Lando Calrissian, whose own miniseries back in 2015 was a top 10 seller; issue #1 surprisingly outsold everything else that month save an issue of Marvel’s “Secret Wars” event. Despite concerns about declining Marvel superhero comic sales, “Star Wars” remains one of the company’s top-selling books.

Below are the top-selling trade paperbacks and graphic novels for August.

Image’s “Paper Girls,” volume 3, is the top-selling trade paperback. Image takes up half the spots on the list; DC has three entries (one trade each for Superman, Batman, and Wonder Woman); and Marvel has two (both X-Men books).

“Paper Girls” is a series by Brian K. Vaughan and Cliff Chiang about a group of preteen paper girls dealing with strange goings-on in 1980s suburban Ohio.

Sales are up over July for comics and trades, thanks to the strength of DC’s “Dark Nights.” However, sales are still soft for the year. They’re also off versus August 2016, though that year had “Rebirth” boosting sales.

Comichron states that while “Dark Nights” shipped about 262,000 issues, this year’s June to August period marked the worst year-to-year decline since 1997. Long-time Big Two fans might recall that’s when Marvel released “Heroes Return,” the restoration of the status quo after the ill-fated reboot “Heroes Reborn.” However, that marked a decline from the summer of 1996, the period when we got “Heroes Reborn” and the now-famous wedding of Superman and Lois Lane.