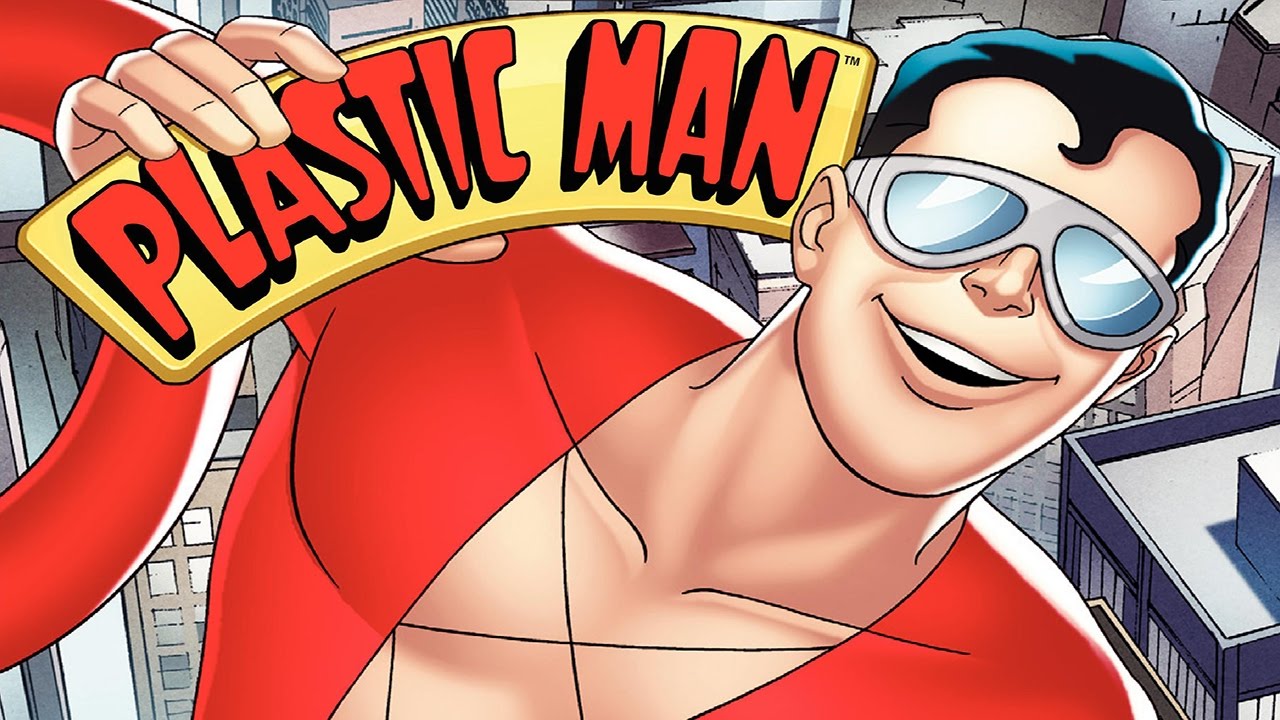 Today’s package show post focuses on “The Plastic Man Comedy/Adventure Show,” a Ruby-Spears produced series that debuted on ABC in 1979; it ran as a two-hour block until 1981. The series was repackaged into half-hour episodes for syndication in 1984; the syndicated package included wraparound segments with a live-action Plastic Man as host.

Plastic Man is the longtime stretching superhero who debuted in Quality Comics’ “Police Comics” #1 (August 1941); he was created by Jack Cole. Since the mid-50s, DC Comics (who bought Quality’s characters) has owned Plas.

A reformed crook named “Eel” O’Brian, Plas’ abilities are the result of an accident in a chemical factory (during an attempted heist). His powers consist of being able to shape-shift and stretch his body into pretty much anything imaginable. Most of the comic versions show him also working for the government.

In this series, Plas travels the world on various assignments given to him by “the Chief,” an unnamed woman. Accompanying Plas are two companions: Penny, a blonde woman, and the oddly-named “Hula Hula,” a Pacific Islander man. Hula has a voice and personality resembling 1940s comedian Lou Costello; he’s also saddled with bad luck. In the comics, Plas’ sidekick is Woozy Winks, a Caucasian man with a similar personality, but without any bad luck.

The son of the now-married Plas and Penny, Baby Plas appeared in the show’s second season in his own segments. They usually involve Baby Plas dealing with neighborhood bullies, babysitters, and so forth. And yes, the opening for his segments make a “bouncing baby boy” joke.

For some reason, nearly all comic versions since the 60s show Plas having a child (inheriting his powers) at some point. The 90s series “Kingdom Come” and its spin-offs introduced “Offspring,” a teenage/young adult son. “Batman: The Brave and the Bold” has an appearance of Baby Plas, albeit with a mother who isn’t Penny.

Mighty Man is a hero who can shrink to six inches tall, while possessing Superman-esque abilities. His sidekick is “Yukk,” a hairy dog who’s billed as the “world’s ugliest dog.” As such, he wears a doghouse-shaped mask over his head; taking it off results in various cartoonish reactions (mirrors shattering, people running in fear, etc.).

The second season of the previous year’s stand-alone “Fangface” series.

“Fangface” was one of the multiple “Scooby-Doo” knockoffs made in the 70s. In this case, it’s the adventures of a group of kids (leader Biff; Daphne Blake-like Kim; cranky/rude Puggsy) and their pal, Sherman “Fangs” Fangsworth… who’s also the werewolf Fangface.

According to the show’s opening, the Fangsworth family has a werewolf born into it every 400 years. Bizarrely, Fangs will transform into Fangface upon exposure to not just the moon, but even a picture of the moon. He’ll also turn back to normal when exposed to the sun, or pictures of same. The rest of the gang carries around pictures of the moon and sun when they needed Fangs/Fangface. Fangs has no memory of what he does as Fangface; for that matter, he’s unaware he’s even a werewolf.

The show’s second season featured the addition of a baby cousin of Fangs; the toddler can turn into a baby-sized werewolf named “Fangpuss.” This apparently ignored the previous “every 400 years” scenario.

The show didn’t have any lifespan past its sole season. These days, it only appears in sporadic Boomerang reruns.

For awhile, Plas was syndicated alongside episodes of other Ruby-Spears produced series. Said series included:

A DVD set of the Plastic Man episodes was released in 2009. To date, the other segments/series haven’t had any home video releases.

Here’s the opening credits for Plastic Man’s own show.