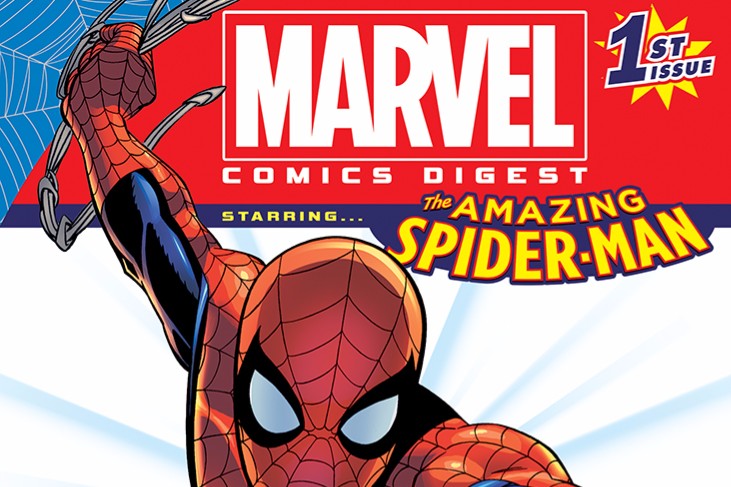 Archie Comics will publish six Marvel digests a year, with four hitting in 2017. The collections will feature various eras and stories including many of Marvel’s most recognizable heroes, with the Amazing Spider-Man and the Avengers hitting first. MARVEL COMICS DIGEST: Starring The Amazing Spider-Man, hits in June. Future MARVEL COMICS DIGEST will feature Iron Man, Hulk, Thor, Black Widow, Spider-Man, Wolverine, and the X-Men!

Archie’s published digests (reprinting older stories) since the late 1970s. For years, digests have been their main presence in supermarkets and newsstands. In recent years, they became bigger money-makers than their traditional single-issue comics.

However, several changes have hit Archie recently. One is the 2015 reboot of their main comic line, providing a vast boost in sales. They still publish their traditional stories in digest form, now with one new story per issue.

Another change for Archie might be to their longtime “Sonic the Hedgehog” license. Since the 90s, Archie’s published a large number of Sonic comics. Said comics have a very strong fan following, and until recently were one of Archie’s biggest money-makers (with sales outpacing everything in the core “Riverdale” universe).

However, while there’s no official statement (yet), something might be up with their license. Archie’s website currently doesn’t offer subscriptions for the Sonic books, though they’re still in April’s solicitations, plus individual issues are still offered for sale online. Archie’s also replaced this year’s Sonic-themed Free Comic Book Day offering with a book based on the “Riverdale” TV show. Even if nothing’s really happening to Sonic, Tails, and company, I can see why Archie might be interested in expanding into newer licensed territory.

Out of the Big Two, Marvel seems to have had a stronger interest in digests in recent years than DC. DC had a line of digests in the late 70s and 80s (reprinting Silver/Bronze Age stories), but hasn’t shown any real interest since the digests’ mid-80s cancellation.

Marvel meanwhile has experimented with digests (of somewhat bigger size than Archie’s). In the 2000s, they published digests of its kid-friendly “Marvel Adventures” line of books, plus some other series. Thus, this new line of digests isn’t unfamiliar territory.

However, it has been quite awhile since they put any heavy effort into newsstand sales, an area that’s long since dwindled for the Big Two (and comics in general) to irrelevance. Perhaps Marvel feels having newsstand comics will make for good marketing tie-ins for the Marvel Cinematic Universe movies? The first digest, featuring Spider-Man, is due out around the time of the “Spider-Man: Homecoming” film release.

Still, maybe we’ll see digest editions for other characters, including Squirrel Girl, Ms. Marvel, and others. If successful, they also might want to consider making at least one new story per issue, akin to the Archie digests.

As for what kind of reprints, perhaps some “Marvel Adventures” issues and/or all-ages-friendly (and digest-format-friendly) older Marvel Universe stories?

Either way, the more formats for comics available to the general public, the better.

Do any of you plan to buy the new Marvel Comics Digests?