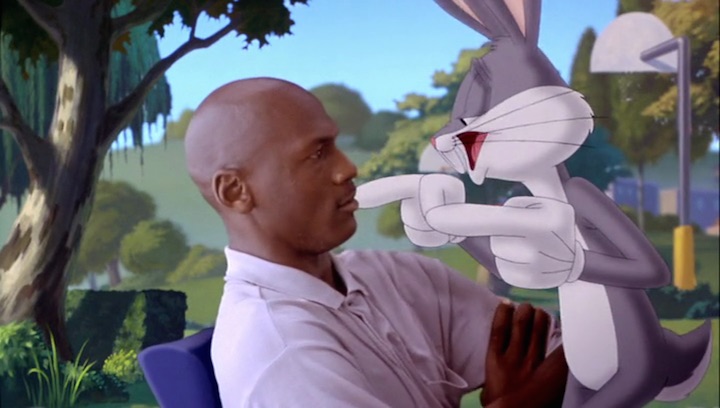 In 1996, Warner Bros. released the film “Space Jam,” co-starring the Looney Tunes and the most prominent basketball player of the era (if not of all time), Michael Jordan. I thought I’d look back over the film (rewriting and updating an older blog post I did on this).

The film revolved around Bugs Bunny and the other Looney Tunes forced to play a basketball game against aliens from another planet. If the Looney Tunes lose, they’ll go back with the aliens to “Moron Mountain,” an amusement park out in space. There, Bugs, Daffy, and company will be kept by the aliens’ boss (voiced by Danny DeVito) as the park’s slaves/attractions.

The aliens at first turned out to be diminutive and bumbling, which is what prompted Bugs and the gang to challenge them at basketball. However, they turn out to have the ability to steal the abilities of top mid-90s basketball stars. This turns the aliens into the “Monstars,” monstrous-but-talented basketball players.

This prompts the gang to recruit Michael Jordan’s help to win. Cue various gags involving the “Tune Squad” (the team’s name) training for the “big game,” a trip to Jordan’s house (“in 3D-land” as Daffy puts it), and the game itself. One guess who wins, of course.

While it has some amusing aspects, the film’s somewhat mediocre in retrospect. There’s the oddness of its premise (Looney Tunes meets Michael Jordan), even with the then-current Nike “Hare Jordan” ads. It also treated Bugs and company as somewhat secondary to Jordan, though Bugs gets a few digs in at Michael.

That said, the film’s soundtrack is one of the best soundtracks from a 90s movie. That’s in part to the musical talent it had (R. Kelly’s “I Believe I Can Fly,” Seal’s “Fly Like an Eagle,” etc.).

The Looney Tunes’ portions of the film are well animated.

Several obscure character cameos appear, ranging from Cecil Turtle (from the “tortoise vs. hare” trilogy of Bugs Bunny cartoons) to the Gambling Bug (from the one-shot 1951 short “Early to Bet”).

In the film, the ‘Tunes live in “Looney Tunes Land,” which is oddly accessed via tunneling below the parking lot of a Piggly Wiggly supermarket for some reason. I’d much rather have seen the gang living in “Tiny Toons””s Acme Acres (as most of them did in that series).

Finally, there’s the question of whether Bugs, Daffy, and company would really need the help of Jordan anyway. Bugs took on single-handedly a team of thuggish baseball players in 1946’s “Baseball Bugs.” The Tune Squad also includes two characters with Flash-level super-speed (the Road Runner and Speedy Gonzales), along with the usual Acme explosives, anvils, etc. Of course, even Bugs has lost in cartoons before. See the aforementioned tortoise vs. hare series, or the ending of 1943’s “Porky Pig’s Feat.”

“Space Jam” introduced Lola Bunny, a rabbit who’s athletically gifted and hates to be called “doll” (as Bugs finds out the hard way). Lola’s introduction caused much debate at the time (and to this day) among Looney Tunes fans. Some enjoyed Lola’s character, while others disliked a newcomer being added to the classic Looney Tunes cast. A few also made comparisons to Babs Bunny from “Tiny Toon Adventures” six years earlier.

Since “Space Jam,” Lola’s stayed around in most subsequent Looney Tunes series, including: recurring stories in the characters’ long-running DC Comics series; “Baby Looney Tunes”; the ill-fated “Loonatics Unleashed” (as her 28th century descendant); and “The Looney Tunes Show.”

It’s in the last series where Lola received a radically changed personality, as an extremely silly, ditzy woman attracted to Bugs. This also caused debate among fans, largely whether they preferred her “Space Jam” or “Looney Tunes Show” persona.

Given its premise and heavy marketing, “Space Jam”‘s received some number of jokes.

Then-current TV shows “Animaniacs” and “Pinky and the Brain” took some shots at “Space Jam.” The latter had this amusing bit of dialogue, in the episode “Inherit the Wheeze”:

PINKY: Oooh, are you going to make a hit movie with a basketball star, and sell jillions of dollars’ worth of souvenirs?!

THE BRAIN: Actually, I considered that, but for my current purpose I am referring to actual worthless junk.