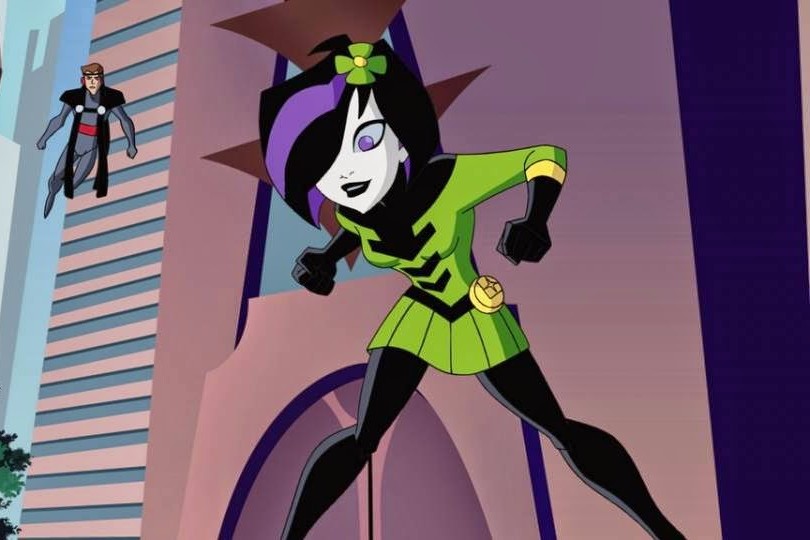 Salu was born on the planet Imsk, whose natives all possess the ability to shrink to microscopic size. Salu decided to try out for membership in the Legion, despite her introverted personality. She eventually succeeded in joining, and served as an excellent steady member. Vi’s shrinking ability made her ideal for various espionage Legion missions.

Later stories show that Imsk has often had a contentious relationship with the rest of the United Planets (the 30th/31st century’s interplanetary government, akin to “Star Trek”‘s Federation). One storyline saw radical Imsk natives kidnap Vi for sinister purposes. Vi eventually was freed. However, the experience left her a changed, more cynical person.

The 1980s saw various changes for the Legion. One change was Vi and fellow Legionnaire Lightning Lass (real name: Ayla Ranzz) in an increasingly close friendship. The late 80s saw a loosening of the Comics Code, including its ban on depictions or mentions of homosexuality. Thus, by the early 90s, it’s made clear Salu and Ayla are in a romantic relationship.

The 2005-2006 miniseries “Infinite Crisis” brought the original version of the Legion (more or less) back into continuity. Shrinking Violet and Lightning Lass’ relationship subsequently also returned.

Vi served as the final Legion leader just before the Zero Hour revamp. Salu also served as leader in the post-Zero Hour version.

For years, it was traditional for the Legion to elect a new rotating leader. The Legion elections were one way of stirring up fan interest in the series.