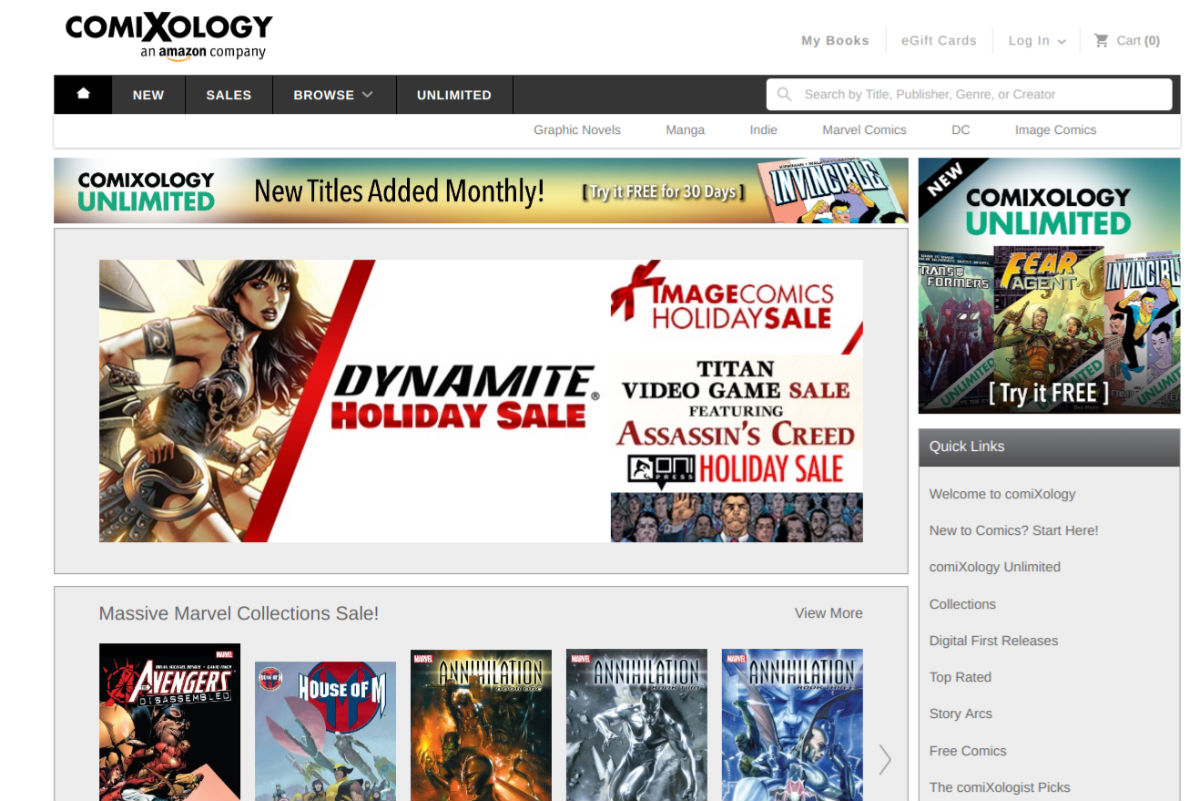 Note: An updated version of this post is available here.

I’ve written before about digital comics readers, but haven’t really written about how one should actually start reading digital comics. Here’s my summary of a few digital comics stores, and my recommendations.

Comixology is the dominant digital comics store, and as such my main recommended service for buying single-issue comics.

Comixology offers apps for Android and iOS devices, as well as a web-based reader for desktops/laptops.

Regarding digital rights management (DRM), most of the digital comics sold through Comixology offer DRM-free backups. The main holdouts left are DC, Marvel, Dark Horse, Boom, and a few smaller others. However, nobody offers (legally) DRM-free comics from those companies. Thus, those objecting to DRM for those publishers will either have to live with it or stick with paper copies. (I don’t ever see Disney-owned Marvel/Time Warner-owned DC changing their minds on DRM.) Comixology is both the largest digital comics vendor and owned by Amazon. Thus, I doubt it’ll go under (taking DRMed copies of Batman and Wolverine with it) anytime in the foreseeable future.

Comixology also occasionally has sales and discounts on comics, especially around holidays.

Comixology’s begun offering its own subscription service, “Comixology Unlimited.” However, despite its name, it more closely resembles Netflix. Books are limited to a few particular runs or issues.

Another factor is that not all publishers are available. DC’s missing, and Marvel offers only select comics/trade paperbacks.

Comixology Unlimited’s geared more toward offering select samples of publishers’ books. Despite this, some might wish to give it a try.

Comixology’s app also allows importing books bought through Amazon (though apparently not vice-versa). This keeps all your comics purchases available in one place.

Marvel Unlimited is a digital subscription service, similar to Netflix, that costs $10/month or $69/year. Users get access to most Marvel comics published up to six months behind the current month. I’ve written previously about Marvel Unlimited, and find it very useful.

Hoopla is a digital media service many public libraries offer. Along with films and TV shows, Hoopla also offers a large variety of digital comics. The digital comics include single issues and trade paperbacks from DC, IDW, Image, Boom, and Archie, plus some others. The comics are read within the Hoopla app, which offers a Comixology-like panel-by-panel viewing feature.

There’s a monthly limit to how many digital comics can be checked out. With my library, it’s 20 checkouts a month. Thus, there’s an incentive to read trades versus single issues when possible. (The service doesn’t distinguish between singles and trades, counting each as a single checkout). It’s also not clear (at least for my usage so far) how often new titles are added. However, Hoopla did add a large number of titles in 2016 from Archie and DC. Also, not all libraries offer Hoopla access; those that do might leave the comics out of their offerings, as mine did until recently.

However, if your library does offer Hoopla, it’s a convenient way to read a variety of comics for free.

There’s some other comic sellers. A few prominent ones include:

Image and Humble Bundle offer their comics as DRM-free, downloadable PDF, CBZ, or CBR files. Buying directly from Image (or individual creators’ own sites) also earns the publishers (and, presumably, creators) more money. Comixology takes a 50% cut off the top on all sales.

Humble Bundle raises money for a variety of charities. It offers a rotating variety of publishers’ comics. Customers can pay as little or as much (with some minimum levels) as they want for comics. Archie, Image, Dark Horse, and others have offered books through Humble Bundle.

For Image, Humble Bundle, and similar sellers of downloadable digital comic files, you’ll need a stand-alone comic reader. I wrote about such readers previously, but to briefly list the recommended ones:

Which comics to read?

I’ve written a recommended comics guide (covering Marvel, DC, and independent comics). It reflects my tastes, but might be of use for some.

As you can see, there’s a lot of options available. But to summarize and simplify things:

If you’re looking to buy single-issue comics, I recommend Comixology. It’s popular, easy to use, and carries nearly all popular publishers. DC/Marvel fans will especially want to stick with Comixology.

If you’re a Marvel fan, fine with renting (versus buying) comics, and can wait six months on new issues, I recommend Marvel Unlimited. It makes catching up on (very expensive) crossover storylines quite affordable.

Those looking to try a few new independent comics might wish to give Comixology Unlimited a try.

Public library users might be interested in trying Hoopla. Hoopla’s a way to read a large variety of comics for free, and without having to go to a physical library branch.