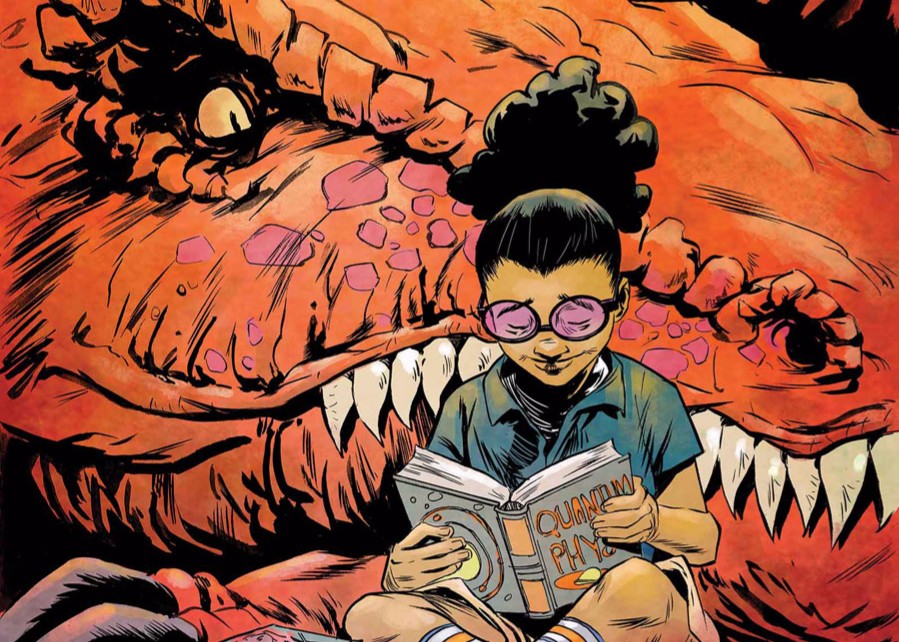 Lunella’s a young girl who lives in New York City and attends a run-of-the-mill elementary school. However, her intelligence is extremely high, at genius levels. This combined with a tendency to daydream makes her out of step with her classmates, who’ve nicknamed her “Moon Girl.” Unknown to the others, Lunella’s learned she has Inhuman DNA. Worried about such, Lunella initially focused on trying to find a way to prevent this aspect of her from emerging. (Making this an issue was the recent global spread of the Terrigen mists.)

Lunella soon meets a time-and-space-displaced Devil Dinosaur. Devil Dinosaur’s a giant red Tyrannosaurus rex-like dinosaur. He was created by Jack Kirby, and first appeared in 1978. Traditionally, Devil Dinosaur would go on adventures in a “lost world”-like past or parallel Earth. (Its exact setting’s varied over the years.) His partner was “Moon Boy,” a hair-covered caveboy.

In this case, Devil Dinosaur and several nefarious cavemen were pulled into modern-day New York by a time warp. Devil Dinosaur takes a liking to Lunella, and becomes her protector/companion. Eventually, Lunella warms up to the big guy. However, at one point (when DD licks her like a dog) she reminds him he’s “not Clifford!” As such, they’ve gone on various adventures together. These included an early run-in with Amadeus Cho‘s Hulk.

Lunella keeps a secret lab beneath her school. It consists of stuff she’s cobbled together from old electronics, appliances, etc. Despite Lunella’s desire to get into a school for super-genius kids, she’s been rejected for unknown reasons.

Despite only being introduced in early 2016, Lunella’s made a splash in superhero comics. Recently, Marvel declared that Lunella is the smartest person in the Marvel Universe. Given that’d mean she’s smarter than Tony Stark, Reed Richards, and other super-geniuses, that’s high praise indeed!