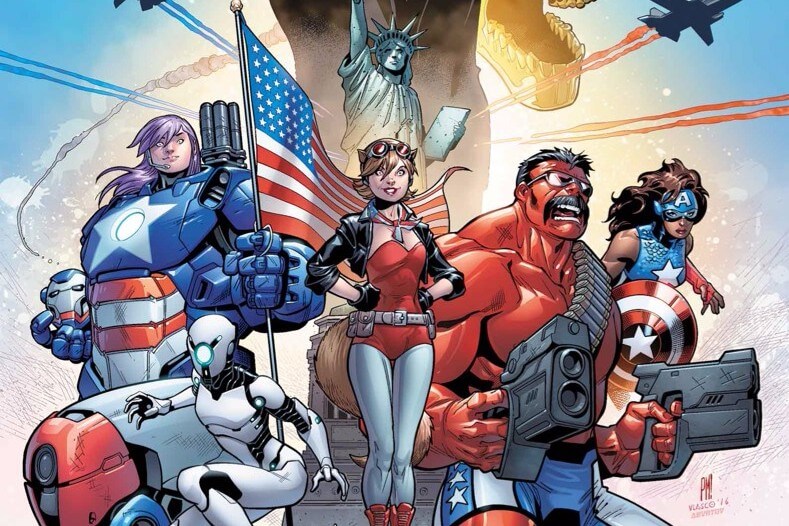 Here’s a look at what’s coming out from Marvel Comics for December 2016. A full list of solicitations is available here.

I thought I should start listing Marvel Unlimited in the Marvel solicits. It’s an offered Marvel comic-related item for sale, and given the expensiveness of comics, some might be interested. Looking back at the books from six months earlier, it’d cost $64 to buy all of the single-issue comics I listed, or $5 short of an annual Marvel Unlimited subscription. Even for this month’s solicits, all of the single-issue books above cost $60 total.

Not that I expect anyone to buy all of the books I list. They’re the books I think look interesting and/or would appeal to the blog’s readers. Still, comics are an expensive hobby, so saving money is worth pursuing. Of course this assumes you’re willing to wait the six months for the books to appear in Marvel Unlimited, or don’t want to just buy the trades.

The Inhumans vs. X-Men crossover continues. Interesting is that the solicits state the X-Men are fighting the Inhumans out of a grudge and for their own survival. Reminds me of some of the real-life criticisms about the Inhumans displacing the mutants attention-wise.

There doesn’t seem to be a few of Marvel’s usual books out this month—“Spidey” and “Ms. Marvel” in particular. But “Spidey” does have a trade paperback out this month. However, it’s titled with a dated reference to the old “Afterschool Specials” ABC ran from 1972 to 1997. I’d doubt the younger readers this book presumably targets will get the reference?

Also with trades out this month, and in time for the holidays, are Moon Girl, Thor, and Black Panther.

A new “Rocket Raccoon” series starts this month, tying into that (somehow) the Guardians are now stranded on Earth. Apparently the myriad of space-faring characters can’t help them return to space?

“Squirrel Girl” this month focuses on Nancy’s pet cat, Mew… along with an actual villain, the Taskmaster.

“Moon Girl” sees the Thing make a guest appearance in her book.