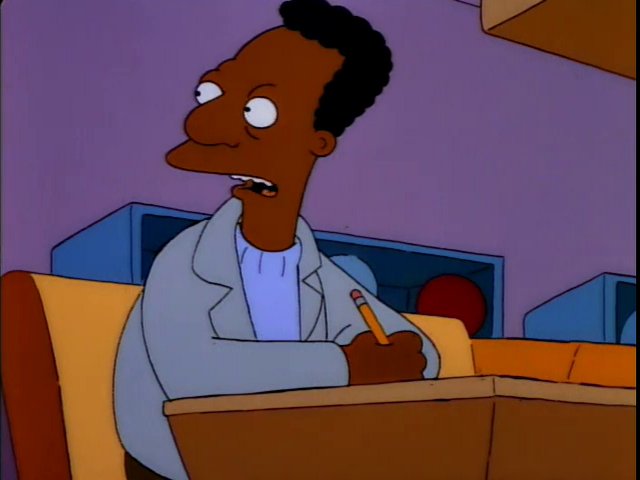 This week’s minorities in cartoons entry is Carl Carlson, a character on the (very) long-running Fox animated series “The Simpsons.”

Carl’s one of the show’s few recurring African-American characters. The others include Dr. Hibbert, Bleeding Gums Murphy (in earlier episodes), and a few other very minor characters (Bart’s classmate Lewis, boxer Drederick Tatum).

Carl’s a childhood friend of Homer, and a coworker of his at the nuclear power plant. Carl’s best friend Lenny is also a coworker at the plant. Lenny and Carl are rarely seen apart, which has lead to a few running gags.

Similar to Dr. Hibbert, Carl’s shown to be one of Springfield’s more competent (or at least somewhat less incompetent) citizens. Carl’s been revealed to hold a master’s in physics. But despite that and a few other intellectual traits, he tends to not do much besides hang out at Moe’s with Homer, Barney, and Lenny. Of the group, Carl tends to play the gang’s straight man. Like Homer, Carl also enjoys watching football and boxing, as well as going bowling.

One episode (1995’s “Bart Sells His Soul”) shows Carl getting upset when Moe proposes turning the tavern into a family restaurant:

CARL: You ain’t thinking of getting rid of the dank, are you, Moe?

Although he’s a secondary character, Carl had had at least one episode about him, 2013’s “The Saga of Carl.” There, Carl’s shown to have been adopted as a kid by Icelandic parents.