A year ago, Canada saw its Boomerang analog, Teletoon Retro, go off the air for good.

During and after the shutdown, I got a lot of traffic and comments on my Teletoon Retro post. Presumably, they’re from irate Canadian viewers who miss Teletoon Retro, and/or aren’t fans of the Disney Channel. I thought I’d take a look at how things stand with the various Canadian channels involved in all of this.

Please note that, since I’m an American, I don’t have direct access to Canadian cable TV, but I’ll do my best. I’m also just addressing the English language versions of the channels involved. However, these channels’ French counterparts were also similarly affected.

A drop in popularity of all-rerun cable channels

All-rerun cable channels aren’t as popular or as profitable as they once were, especially with increased competition nowadays: original cable TV programming, Netflix shows, etc.

Various corporate decisions and acquisitions made by Corus, a Canadian children’s programming giant. Corus owns quite a bit:

Disney’s finally started up a Canadian version of its channel. Similarly, Cartoon Network’s also started up its own channel in Canada. It looks like Disney and CN replaced the shut-down Retro in most Canadian cable lineups, while Teletoon and Family underwent some programming reshuffling.

Until a year ago, Teletoon was the home of a lot of Cartoon Network’s programming, but now has lost that to CN itself.

Based on their website, Teletoon’s current lineup consists of a mix of:

Some of Teletoon’s shows are only found on Netflix here in the US, such as Russian series “Masha and the Bear.”

Still, it looks like the most popular Retro shows made the jump to Teletoon. I’d assume Teletoon likely needed material to fill in the now-missing Cartoon Network shows. So I assume Retro fans are somewhat pacified? (If not, please let me know in the comments.)

Disney Channel and its sibling stations, Disney XD and Disney Junior, are airing almost the same lineup of shows as here stateside.

The only difference is Disney carrying a few Canadian made shows (“Willa’s Wild Life,” etc.) to satisfy Canadian TV content requirements. One standout might be “My Babysitter’s a Vampire”; that show’s a Canadian-made series that airs on Disney Channel in both Canada and the US.

Cartoon Network’s still treated as a secondary digital cable channel north of the border. However, it’s now the home of most of the American Cartoon Network/Adult Swim lineup of shows. CN up in Canada currently operates under Teletoon Retro’s old broadcasting license.

Wikipedia suggests this was because Retro had a more widespread and established presence on cable lineups. Also, I’d imagine “Steven Universe” is a more lucrative advertising and ratings draw than “Rocket Robin Hood.”

Looking at its site, CN Canada airs the bulk of the US CN/Adult Swim lineup. An exception is some shows from Teletoon (“Total Drama”) for Canadian content requirements. A few of the Teletoon shows are only available here on Netflix. One such example is “The Day My Butt Went Psycho”…which is a show that actually exists, for some reason. 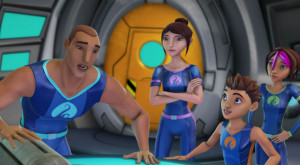 Canadian kids’ media conglomerate DHX owns Family. DHX is the owner of the Cookie Jar and DIC library of shows, including “Inspector Gadget” and “Johnny Test.”

For years, Family was the home of the Disney lineup in Canada. However, with the debut of Disney Channel, Family was forced to change up its channels’ programming. As such, it’s switched its former Disney XD and Disney Jr. channels to “Family Chrgd” and “Family Jr.”

As for what shows the Family channels are airing, part of it’s the DHX library of shows. There’s also various third-party produced shows. Among the shows airing are “The Deep” and PBS’ “Nature Cat.”

The Family channels also air shows like “Turbo FAST,” thanks to an agreement with Dreamworks.

YTV still seems to be serving traditional role as the home of a lot of Nickelodeon’s programs, including “Fairly OddParents” and “The Loud House.” Per the norm, it doesn’t have a few shows that aren’t Nick-owned (like “Alvin and the Chipmunks”). The network also airs some extra Canadian-made shows.

Everything seems to have undergone a large amount of reshuffling. Of course, TV viewing itself is increasingly shifting to online or on-demand. There’s also rising costs of cable leading to cord-cutting/cord-shaving. Thus, I wonder how much Canadian viewers will ultimately care what happens, if they can get “SpongeBob” or “Gravity Falls” online?

That said, if you do care, or if I missed something, feel free to chime in in the comments below.