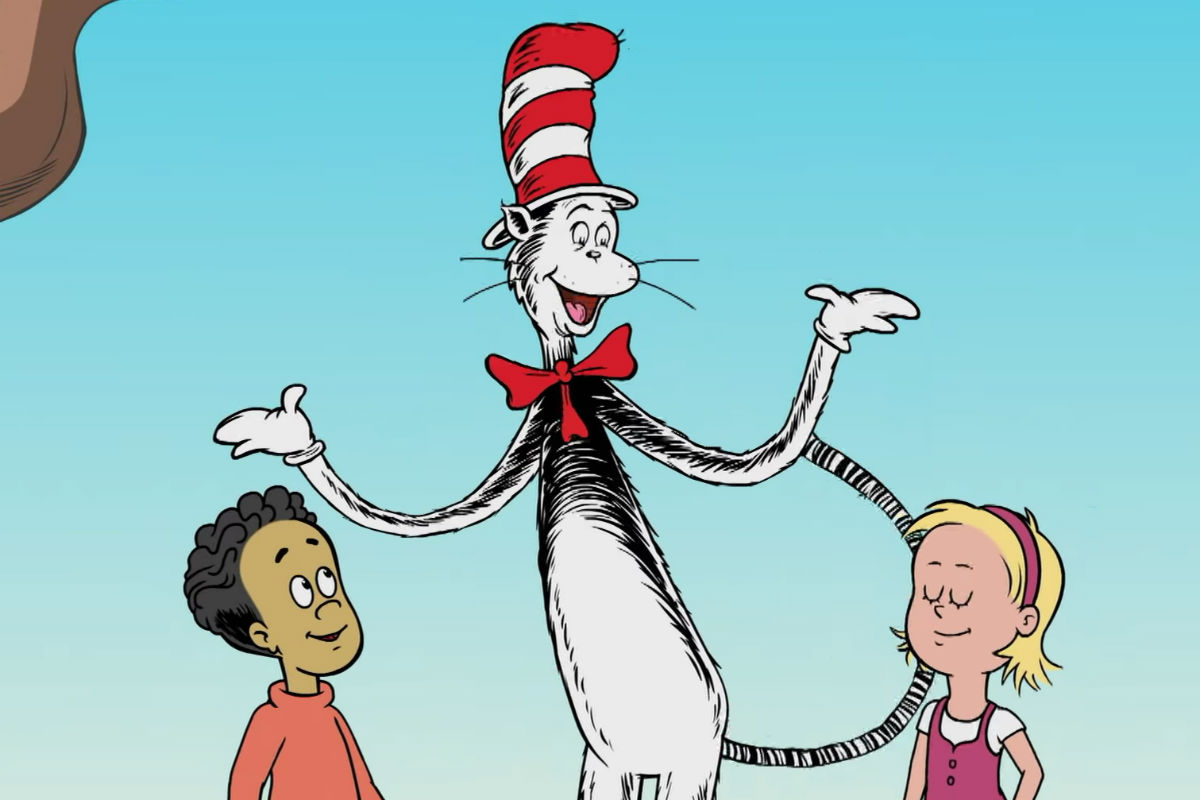 This week’s minorities in cartoons entry is “The Cat in the Hat Knows a Lot About That.” The series, based on the classic Dr. Seuss “Cat in the Hat” books (including an educational spin-off line), debuted on PBS in 2010.

The series emphasizes teaching lessons about nature to its kid viewers. Each episode (two per half hour) sees grade-schooler friends Nick and Sally face some difficulty or have a question about something. After this, the Cat pops up from out of nowhere. The Cat states he knows of a particular animal friend that could help the kids solve their problem/question. He takes the kids to the habitat the animal lives in the flying “Thingamajigger,” a vehicle similar to the one seen at the end of the original “Cat in the Hat” book.

Accompanying the Cat and the kids are the Fish (from the original book, now a friendly accomplice of the Cat) and Things One and Two. After the adventure, the kids resolve their problem using what they’ve learned during their adventure.

Besides Fish now a friend of the Cat, the other major change in this series from the books is Nick replacing Sally’s brother from the book. Nick and Sally seem to be next door neighbors; their mothers are occasionally shown. Nick’s Mom seems to have some a Caribbean accent. The series’ producers stated they did this on purpose, wanting to add some diversity.

The series has had (as of this writing) 60 half-hour episodes, plus several specials, including one centered around Christmas.

The show seems to do a decent job teaching young kids about animals. It’s also part of a trend in PBS Kids programming focused on nature or the outdoors. PBS Kids shows with a similar nature focus include “Wild Kratts” and “Nature Cat.”

The Cat is voiced by comedian Martin Short. Nick and Sally are voiced by Jacob Ewaniuk and Alexa Torrington respectively, two Canadian voice actors. (The series is animated in Canada.)

Why isn't there more cursing in DC and Marvel comics?
Cartoons at the box office: We've got a gorilla for sale, a movie gorilla for sale...
What are the main influences on 2010s TV animated cartoons?
Minorities in cartoons: Alejandro ("Total Drama")
Share this post