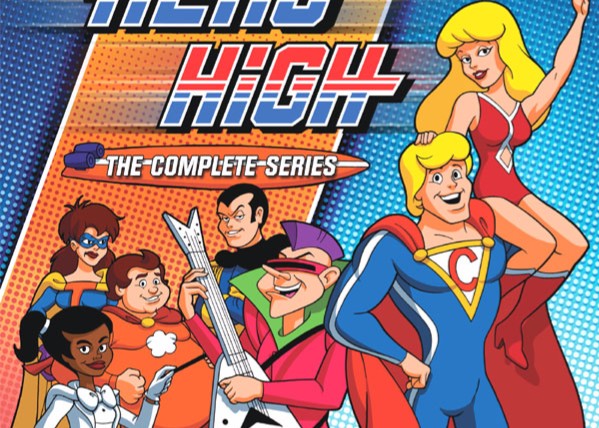 This week’s minorities in cartoons entry is “Hero High,” a Filmation animated series that aired from 1981-82 on NBC.

“Hero High” was about a high school for budding (but bumbling) teenage superheroes, where they learned the fine art of heroics and how to master their powers. (The same premise as the movie “Sky High,” but 25 years earlier.) The main cast of teens included:

A storyboard artist on this series, Robert Lamp, wrote on his site about working on “Hero High.” The show was originally planned to be another of Filmation’s Archie series of shows, this time using Archie’s “Pureheart the Powerful” superhero persona (and the gang’s “Super-Teens” superhero identities). Apparently the Archie rights by then had fallen through, so Filmation retooled the premise into “Hero High” instead. That’d probably explain why the above five have some similarities to Archie, Betty, Reggie, Veronica, and Sabrina respectively. Making this particularly obvious is Miss Grimm, the students’ teacher; she looks like a cousin of Riverdale High’s Miss Grundy.

In Misty’s case, her similarity to Miss Spellman stops at wielding magic. Misty often used a wand to make use of her powers (versus tugging on her ear like Filmation’s Sabrina), and her uncle was the local chief of police (versus Sabrina’s witch aunts).

This series aired as part of “The Kid Super Power Hour With Shazam!.” The hour featured live-action wraparound segments, with the voice actors dressed as the “Hero High” cast members. They’d engage in corny jokes and slapstick, and also play some musical numbers, including the opening theme song.

The other half of the show featured animated “Shazam!” shorts, starring Captain Marvel, Mary Marvel, Captain Marvel Jr., and the rest of the classic Marvel Family of characters. Being the early 80s, the pre-Crisis/Golden Age Marvel Family lore was used in this series. One example is Mary calling on her own pantheon of mostly-women deities for Shazam-powers (specifically: the grace of Selena, the strength of Hippolyta, the skill of Ariadne, the fleetness of Zephyrus, the beauty of Aurora, and the wisdom of Minerva).

Filmation had produced the live-action 1970s “Shazam!” series, and recycled its theme music for this series. Until a series of “DC Nation” “Shazam!” shorts in the 2010s, this was the last regular series to feature the Marvel Family.

“The Kid Super Power Hour With Shazam!” lasted for just one season. “Hero High” was later syndicated on its own, without references to its DC Comics-owned “Shazam!” half of the show.

The entire “Hero High” series has been released to DVD.

Misty Magic was voiced by Jere Fields. Fields did some live-action acting in various 1970s/80s films and TV shows, including “What’s Happening Now!,” a short-lived mid-80s revival of the 70s sitcom “What’s Happening.”

Here’s the opening credits for “Hero High,” in all its typical Filmation glory. Misty shows off her powers in a few spots in the opening, including transforming people and objects.