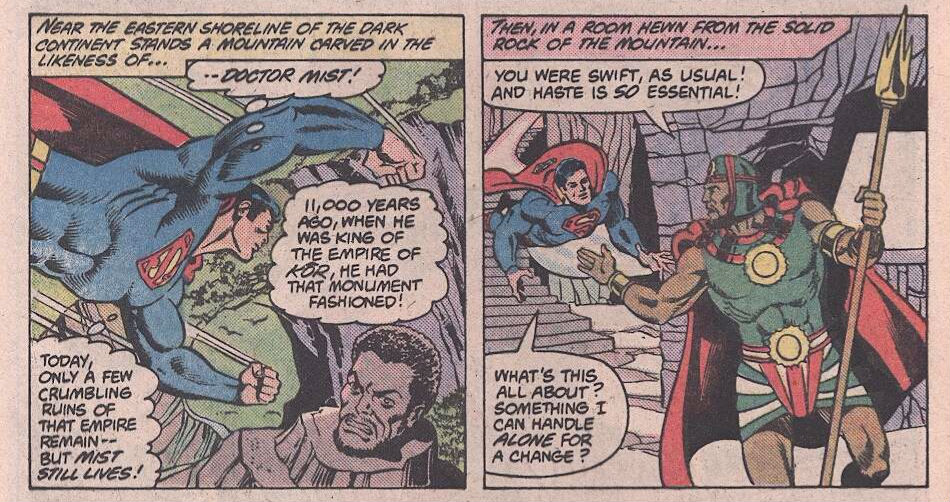 Mist’s origin states he was originally known as Nommo, a wizard who was the ruler of the fictional ancient African empire of Kor. 11,000 years ago, Nommo stood in the “Pillar of Life,” which granted him immortality. Kor was later destroyed after Mist fought a battle with future Justice League of America foe Felix Faust.

Mist also was shown to have ties to DC’s “Homo magi,” a subset of humanity that’re talented magic users. The most famous such member is JLA member Zatanna.

Doctor Mist was the founder and leader of the superhero team the Global Guardians, an international team of superheroes; some of the members have included Tasmanian Devil, Fire, Seraph, and Owlwoman. Pre-Crisis, Mist founded the team in 1982’s “DC Comics Presents” #46, their first official appearance. (The characters had appeared before then in various non-canonical “Super Friends” comics.) Post-Crisis, the team’s origins were retconned. Doctor Mist was still the founder/head of the Guardians. However, the team now operated under a fictional United Nations organization known as “The Dome.”

The Guardians lost its funding (thanks in part to an enemy) when the UN decided to shift its funding to the then-newly-created Justice League International. The team members went their separate ways. After rescuing some of his teammates from a villain’s brainwashing, Mist formed a new incarnation of the Global Guardians.

Mist later appeared after Zero Hour (and his physical body’s supposed death), creating another superhero team, the Leymen. Said team appeared in the short-lived 1994-95 title “Primal Force.” Mist also had renamed himself “Maltis.” The book was soon cancelled, with Mist shown as having been killed by Mordru. Mordru’s a powerful sorcerer who’s better known as the enemy of the Legion of Super-Heroes.

Mist was revived after the New 52 revamp in 2011 in “Justice League Dark.” Nommo for some reason gained a last name (“Balewa”) and typical grimdark New 52 trappings. I won’t bother going into any further depth.

In all versions, Doctor Mist possesses various mystical powers along with his immortality.

Mist made an appearance in the short-lived NBC series “Constantine.” There, Mist was an African shaman named Nommo. Mist was played by actor Charles Parnell.