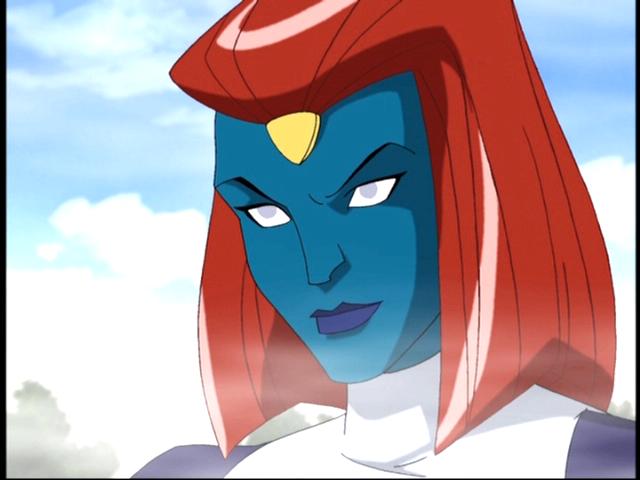 This week’s minorities in cartoons entry is Mystique, a Marvel Comics supervillain. Mystique (real name: Raven Darkhölme) first appeared as a cameo in “Ms. Marvel” #16 (April 1978), and made her first full appearance in “Ms. Marvel” #18 (June 1978). She was created by Chris Claremont and David Cockrum.

Raven’s backstory’s quite “in-depth”…which of course means convoluted, being an X-Men character; see Wikipedia and these Marvel wikis for full details.

To simply her origins as much as possible: Mystique is a mutant with shape-shifting powers, which let her imitate anyone’s voice and appearance. As such, she’s used these abilities throughout her life for various morally dubious ends, including spy work, terrorism, and so forth.

At one point, Mystique also was the founder of a version of the Brotherhood of (Evil) Mutants, a team of mutant foes of the X-Men. Oddly, she’s also once joined one incarnation of the X-Men. Mystique’s goals are often similar to those of Magneto in fighting for the benefit mutantkind, though often in all of the wrong ways.

Like Wolverine, Raven’s quite old, with her powers keeping her youthful. She’s been married several times, and has had two biological children (both given up for adoption): Nightcrawler and Graydon Creed. Nightcrawler’s a longtime X-Men member, who resembles a demon and has teleporting powers. Graydon Creed was an ordinary non-powered human (despite two mutant parents) who grew up to become a politician leading an anti-mutant group. Graydon was eventually assassinated by a time-travelling alternate-future version of Mystique (like I said, this was the simplified version).

Of interest for this entry is that Mystique’s longest-lasting relationship was with another woman, a fellow mutant named Destiny. The two for a time (until Destiny’s death) lived in rural Mississippi. There, they took in and raised as an adopted daughter the mutant known as Rogue. Since then, Rogue and Mystique have clearly parted ways, with Rogue siding with the X-Men.

Outside of comics, Mystique’s appeared in most media adaptions of the X-Men. However, her most prominent appearances have been in the theatrical films. There, Mystique’s backstory was greatly simplified, including not mentioning her relationship with Destiny. Mystique was originally played by Rebecca Romijn, then in later films by Jennifer Lawrence.