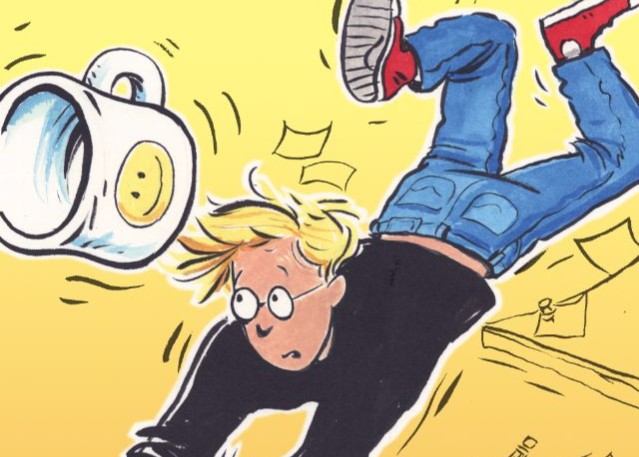 This week’s minorities in cartoons entry is “Jane’s World,” a comic strip by Paige Braddock. The strip debuted in 1998.

“Jane’s World” stars Jane, a twentysomething lesbian who lives with her straight best friend, Ethan. Jane’s shown having worked at various jobs through the strip’s run (all of them mediocre or less-than-glamorous). Much of the strip also shows Jane dealing with her love life, including ex-girlfriends, as well as a sizable cast of friends.

Some of Jane’s friends include: Chelle (an aggressive special ops agent and ex-girlfriend of Jane); Skye (a vegan waitress); and Dorothy. Dorothy is described by Braddock’s site as Jane’s “on-again, off-again” girlfriend, though Wikipedia states Jane’s also dated Skye.

Also appearing in some strips is a pastiche of Stephan Pastis known as “Shallow Breast Guy,” a straight guy who’s obsession is, well, in his nickname. Pastis in real life is a friend of Braddock, and the cartoonist of the comic strip “Pearls Before Swine.” Both have also worked on material related to “Peanuts.”

While it’s mainly a humor strip, “Jane’s World” has taken some dramatic turns in stories involving Chelle. On the humor end, aliens sometimes make appearances in the strip.

“Jane’s World” has been collected into multiple compilation volumes. The strip was also nominated for an Eisner Award for best humor book in 2006.