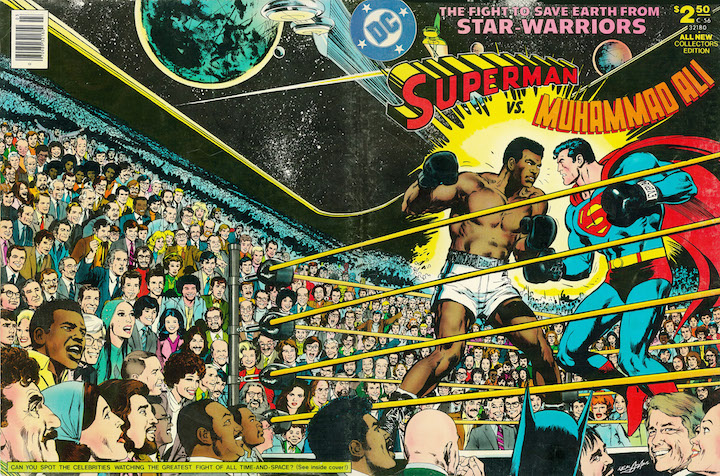 I’ve been writing about monthly comics solicitations for years, and also have done a few one-off recommended comic posts. However, I thought I should write some more evergreen posts listing what comics overall I’d recommend.

To outline my criteria, I’ll cover the entire timespan of comics, from Golden Age to the present, so it won’t just be recent material. I’ll also favor trade paperbacks and graphic novels. Trades are easier and more convenient for most people to buy and store than single paper issues.

I’ll start things off with Superman comics. The recommendations will include the Superman family of characters (Supergirl, Lois Lane, Superboy, etc.).

Superman in the Fifties. Contains the first appearances of Krypto, Supergirl, Bizarro, Titano, and Brainiac.

Superman in the Sixties. Contains the Silver Age retelling of Superman’s origin (1961’s “Superman” #146), the deaths of Ma and Pa Kent, and “Superman’s Mission For President Kennedy.” A few of the bizarre Lois Lane/Jimmy Olsen stories of the era are here, including the classic “Giant Turtle Man” story.

Superman in the Seventies. Contains several Bronze Age classics, including “Must There Be a Superman?,” the wedding of Lois Lane and Clark Kent of Earth-2, and the first appearance of Terra-Man. The story where Lois Lane becomes African-American for a day is also here.

Superman in the Eighties. Contains a final few noteworthy pre-Crisis issues, as well as a few post-Crisis ones, including “Action Comics” #600.

Whatever Happened to the Man of Tomorrow? The classic Alan Moore-written “last” pre-Crisis Superman story.

Superboy: The Greatest Team-Up Stories Ever Told. See my previous post on this volume of pre-Crisis Superboy stories, where he meets everyone from a time-traveling Robin to a teenage Aquaman (or “Aquaboy”).

Superman vs. the Flash. Every pre-Crisis Superman versus the Flash (Barry Allen) race.

Superman: The Wedding Album. The 1996 wedding of Clark Kent and Lois Lane, featuring art by various artists both past and then-present.

Kingdom Come. This 1996 “Elseworlds” involves the DCU as a whole, but it heavily centers around the Man of Steel.

Superman For All Seasons. Jeph Loeb and Tim Sale’s 1998 miniseries about Superman’s life and background, including his Smallville roots.

Superman: Birthright. The 2003 retelling of Superman’s origin by Mark Waid.

All Star Superman. The popular 2005-2008 miniseries by Grant Morrison and Frank Quitely, about a dying Superman’s final days.

Superman: Secret Identity. A 2004 miniseries by Kurt Busiek and Stuart Immonen about a man in the real world named Clark Kent, who discovers he has powers like his namesake.

Supergirl: Cosmic Adventures in the 8th Grade. A 2009 miniseries (aimed at younger readers) about Supergirl’s adventures as a junior high school student.

Superman: The Greatest Stories Ever Told, vols. 1 and 2. Both volumes are the most recent versions (there’s earlier, long out-of-print incarnations). Volume 2 in particular contains “Must There Be a Superman?” from the “Seventies” volume above, plus 2001’s “Action Comics” #775, “What’s So Funny About Truth, Justice, and the American Way?” The latter was the basis for the animated movie “Superman vs. the Elite.”

Superman/Batman: The Greatest Stories Ever Told. Various “World’s Finest” team-ups from across the decades, including the duo’s first meeting.

Superman: A Celebration of 75 Years

Lois Lane: A Celebration of 75 Years

Lex Luthor: A Celebration of 75 Years

Any of the above would be entertaining reading. To add a few final things: