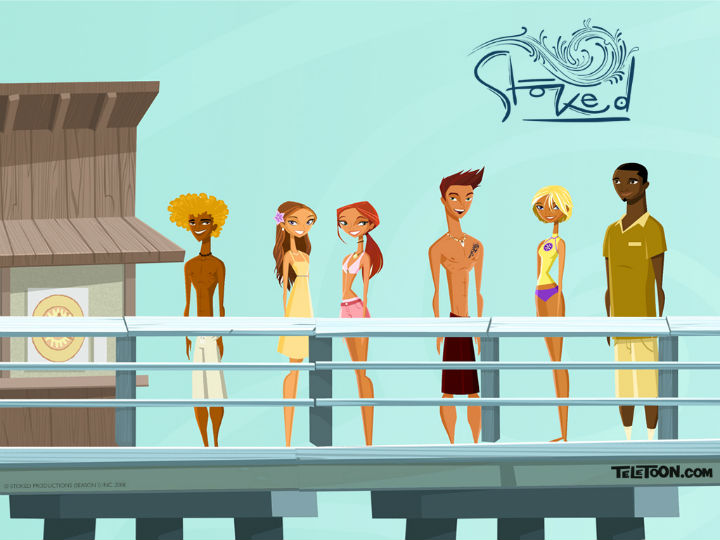 This week’s minorities in cartoons entry is “Stoked,” a Canadian animated series that aired from 2009 to 2013 on Teletoon (in Canada) and Cartoon Network (in the US).

The series revolves around a group of six teens, who’re all surfing fans. As such, they’re all working at a summer resort at the fictional Surfer’s Paradise Hotel in British Columbia, a major west coast surfing spot.

They’re all hoping to enjoy their first big summer away from home and getting in as much surfing and fun as possible. This is despite the demands of their jobs, annoying bosses, and obnoxious guests and secondary characters. There’s also the run-down, filthy employee housing they’re all forced to stay in.

The cast of teens include:

If the above cast sound familiar, it might be because the producers of this series also produced the 2000s series “6Teen.” That might explain this series’ similar elements and characters. (Very broadly speaking, Reef = Jonesy, Fin = Nikki, Emma = Jen, Broseph = Jude, Lo = Caitlin, and Johnny = Wyatt, with the resort replacing the Galleria Mall.) That said, the show doesn’t seem set in the same universe as “6Teen” as far as I know.

The series ran on Teletoon for 52 episodes, all (similar to “Gravity Falls“) somehow taking place over the course of a single very long summer.

Here stateside, “Stoked” didn’t have as long or successful a run as even “6Teen” (which hopped a few networks here). It aired briefly during its first season on Cartoon Network before basically vanishing. However, the entire series is available on Hulu.

The first season of 26 episodes is also available on DVD.

Mazin Elsadig voiced Broseph. Elsadig is an actor who’s appeared in “Degrassi: The Next Generation.”

Minorities in cartoons: Hulkling
The 2015 Oscar animation nominees, plus the least diverse Oscars in 20 years
Cartoons at the box office: "Taken 3" takes first place
Why do so many Black superheroes have electrical powers?
Share this post