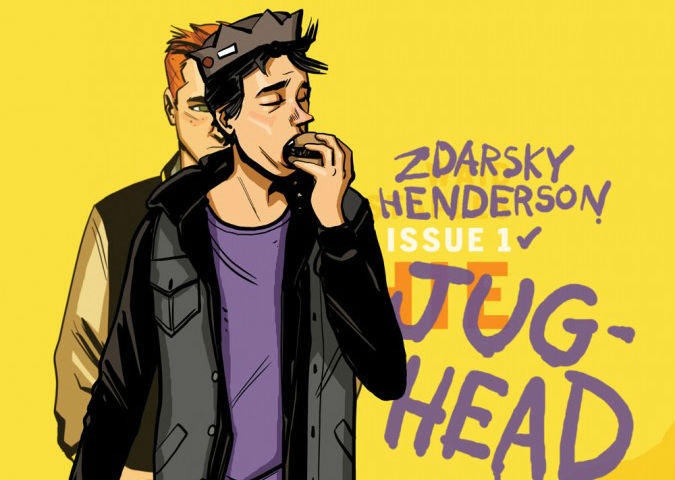 This week’s issue of the rebooted “Jughead” comic (“Jughead” #4) makes a pretty big revelation (or depending on point of view, confirmation) about its star, Forsythe Pendleton Jones III, as shown in the panel below.

As written and drawn by Chip Zdarsky (of “Sex Criminals”) and Erica Henderson (of “Squirrel Girl”) a conversation between Jughead and Kevin Keller reveals that Jughead’s asexual. Jughead notes he’s “…not hobbled by these hormonal impulses!,” while commenting on the comic’s ongoing storyline (a strict new principal’s taken over at Riverdale High).

(As an aside, Kevin notes there’s “only, like, five gay guys” at Riverdale High. I assume that’d be openly gay guys, at least.)

For years, comic readers have wondered (or joked about) whether or not Jughead’s gay. Jughead’s biggest trait, besides his voracious appetite, has been his avoidance and intense loathing of all things related to romance or dating. Older comics usually had Jughead proclaimed as a “girl hater”; he’d react very negatively toward the idea of romance, playing off his girl-obsessed best friend Archie Andrews. That said, Jughead has always been friends with other girls (particularly Betty), despite not wanting to date them.

In the late 80s, Archie experimented with the idea of having Jughead regularly dating. This led to him dating several girls, including (oddly) Archie’s 29th century descendant, the time-traveling January McAndrews in “Jughead’s Time Police.”

By the mid-90s, Archie had reverted Jughead back to the usual status quo. Subsequent stories decided that Jughead is merely disinterested in romance, preferring the “simplicity” of food. There’d be sporadic exceptions; when Jughead needed a date for a party or somesuch, he’d take his long-time admirer, Ethel, who had an unrequited crush on Jughead. There’s also the occasional cover gags where, say, he’s interested in a girl named “Patty.”

With the introduction of Kevin Keller several years ago, non-heterosexuals were finally allowed to exist in Riverdale. Some have felt that Jughead should’ve been the one to come out as gay instead of creating a new character; however, I think Kevin’s worked out well. Now, with the reboot of the main “Archie” and “Jughead” comics, it seems they’ve decided to allow one of their core characters (Archie, Jughead, Betty, Veronica, and Reggie) to be revealed as non-heterosexual.

This is a very big development for a major comics publisher; especially one whose star characters are almost as old as Superman and Batman. Additionally, characters who’re asexual are a rarity among mainstream publishers.

Zdarsky’s commented on Jughead’s asexuality (from the CBR article):

“My view of Jughead is, over the 75 years [of his existence] there have been sporadic moments where he has dabbled in the ladies, but historically he has been portrayed as asexual,” Zdarsky said at an “Archie”-themed panel at NYCC. “They just didn’t have a label for it, so they just called him a woman-hater. But he’s not a misogynist — he just watches his cohorts lose their minds with hormones. People have asked me if there is going to be a romance if I’m writing Jughead, because I’m very romantic, and the answer is no, because there is enough of that in Archie. I think something like asexuality is underrepresented, and since we have a character who was asexual before people had the word for it, I’m continuing to write him that way.”

Archie’s still telling new stories with the “traditional” style in the digests. It remains to be seen if Jughead there will reflect any of the above.