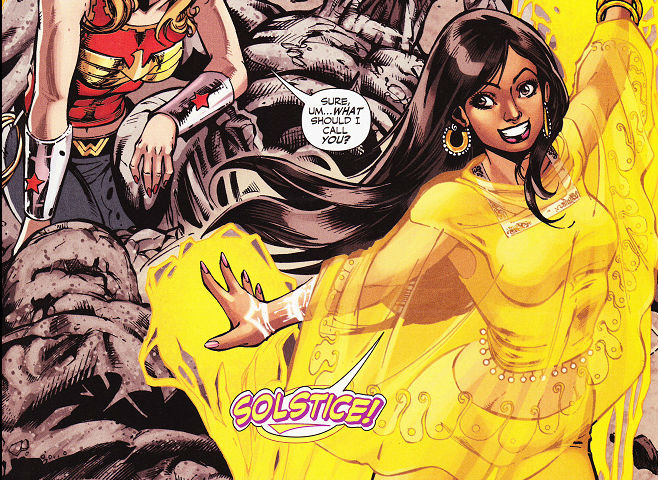 This week’s minorities in cartoons entry is Solstice, a DC Comics superheroine. Solstice first appeared in “Teen Titans” (vol. 3) #89 in January 2011. She was created by J.T. Krul and Nicola Scott.

Solstice (real name: Kiran Singh) is a teenage girl from Delhi, India, whose parents are archaeologists. While at an archaeological conference in London, Kiran meets and befriends Cassie Sandsmark, also known as Wonder Girl. The two end up fighting off a supervillain attack, which sees Kiran reveal her abilities and superheroic name. Fortunately, Kiran’s parents already know about both.

Later, Cassie and Kiran’s parents are both working on the same archaeological dig, but Kiran’s parents soon go missing. Kiran uses her powers to search for them. Solstice finds her parents during an adventure with the Teen Titans, and ends up joining the superhero team.

Solstice got rebooted along with everyone else in 2011’s New 52 revamp. Kiran thus received various “updates” despite being less than a year old as a character. These changes included gaining a smoky black exterior with blue light shining through cracks in Kiran’s body. She also got a darker past, with a secret organization holding her captive.

Solstice possesses a range of light-based powers, including generating bright blasts of light from her hands and flight. She can also create her costume spontaneously from solar energy. A DC Comics wiki states that Kiran’s fluent in Hindi, Punjabi, and English.