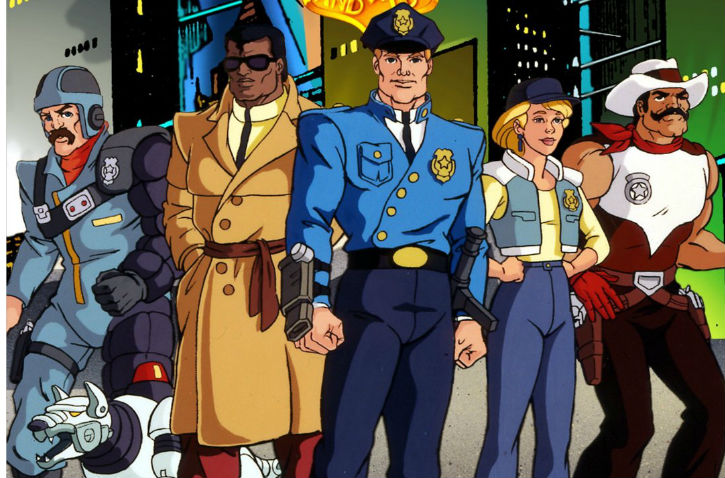 This week’s minorities in cartoons entry is “COPS,” an animated series that ran in syndication from 1988 to 1989. DIC animated the series, based on a line of Hasbro toys.

The series was set in fictional Empire City. The Internet Movie Database (IMDB) states the series was set in the year 2020, or 30 years in the future at the time. As the series’ opening slogan described its premise: “fighting crime in a future time, protecting Empire City from Big Boss and his gang of crooks.” The specified “Big Boss” was just that: Big Boss was a crime boss that sought to gain complete control of Empire City through his mob, consisting of various criminals with futuristic enhancements.

To combat Big Boss and his mob, Empire City asked the FBI to send assistance. The FBI sent one Baldwin P. Vess, an African-American special agent. However, Vess got into a serious auto accident during a fight with Big Boss’ goons. He was equipped with a special cybernetic bulletproof torso to save his life.

One of the officers was “Mirage” (real name: Suzie Young), an Asian-American woman from San Francisco. A master of disguise, Mirage specialized in undercover missions.

After running in syndication for 65 episodes, the series saw a one season run on CBS in 1993. The CBS run aired under the name “CyberCOPS,” to avoid confusion with the long-running Fox primetime series of the same name. “COPS” later ran in 1995 under its original name on the USA network.

In the 2000s, the entire series was released to DVD.

The “COPS” action figures contained information cards that described the characters’ backgrounds. Supposedly, several characters are the offspring of a few characters from “GI Joe,” another Hasbro property.

Ken Ryan voiced Bulletproof. Ryan’s an actor who was in some movies and TV shows (including “The Commish”) in the 80s and 90s.

Here’s the opening credits for “COPS.”