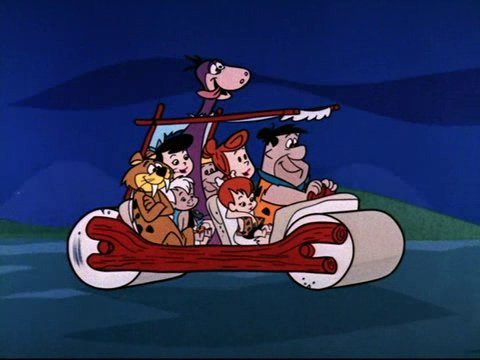 Today’s package show look is at the series “Fred Flintstone and Friends.” Originally airing in syndication during the 1977-78 TV season, the show stayed available in syndication through the mid-80s.

“Friends” was a package shows consisting of several Hanna-Barbera shows from the early to mid-70s. All of these shows were repackaged from their original half-hour formats into multipart serialized stories. New bumpers and introductions connecting all of these were added, voiced by Henry Corden in his Fred Flintstone voice.

The segments that made up this show are discussed below. Here’s the opening credits for this entire package show, though not the original opening (unavailable online); it’s a reconstruction someone made using clips of the various shows paired with the original opening’s audio.

Goober and the Ghost Chasers

One of the multitude of “Scooby-Doo” knockoffs, this show also featured a group of teens and their pet dog who fought crime/solved mysteries, and fought supernatural threats. Unlike Scooby, Goober could speak clearly (at least to the viewers) and would turn invisible when frightened. Half the episodes also featured guest appearances by the Partridge Family. “Goober” aired for one season in 1973.

A spin-off of classic 60s sitcom “I Dream of Jeannie,” 1973’s “Jeannie” saw the starring genie (voiced by Julie McWhirter) as a teenager. Here, Jeannie granted the wishes of an also-teenaged boy, Corey (voiced by Mark “destined to play Luke Skywalker in another four years” Hamill). The show also crossed over with “The New Scooby-Doo Movies,” as one of the episodes not available on that show’s DVD set. The reason for that is the rights to this series belong nowadays to Sony, the owners of “I Dream of Jeannie.”

Jeannie also had a sidekick on this series, the bumbling “junior genie” in training, Babu. Babu was voiced by Joe Besser (“Curly Joe” of the Three Stooges), and went on to appear as a contestant on “Laff-a-lympics” without Jeannie.

This 1974 one-season series saw primetime’s “Partridge Family” portrayed as a family living in a Jetsons-like future. It’s “Jetsons-like” because this series was originally going to be an updated spin-off featuring teenage/young adult versions of Elroy and Judy Jetson, but CBS wanted a series starring the Partridges instead. As such, Sony currently also owns the rights to this series (per owning the primetime show).

As part of “Fred Flintstone and Friends,” the show was renamed “The Partridge Family in Outer Space.”

The Pebbles and Bamm-Bamm Show

The first of a long series of “Flintstones” spin-offs, this 1971 series saw Pebbles and Bamm-Bamm as teenagers, engaged in various wacky hijinks around Bedrock. Pebbles took after her father’s personality in engaging in ill-considered schemes (and unfortunately with little of her mother’s common sense), while Bamm-Bamm took after his father in being wary/the voice of reason. Bamm-Bamm drove around in prehistoric dune buggy (a “cave buggy”) like every other 70s-era Hanna-Barbera series; the result of middle-aged writers thinking “that’s what kids are into,” perhaps?

Most of the elements and cast of this show appeared in several latter spin-offs, including “The Flintstone Comedy Show” in the early 80s.

“The Flintstone Comedy Hour” was a 1972 hour-long series that featured reruns and new episodes of “Pebbles and Bamm-Bamm,” plus song numbers with the “Bedrock Rockers” (the teens’ own rock group) and various segments featuring Fred and Barney. After its run on CBS, the show was repackaged for syndication into the half-hour “The Flintstone Comedy Show,” not to be confused with the early 80s series of the same name.

Dino, who was absent from “Pebbles and Bamm-Bamm,” made a return in a few segments of this series.

This 1973 series (a spin-off of an earlier TV special) saw the entire classic funny-animal Hanna-Barbera pantheon travel the world in a flying ark, with Yogi Bear as its captain. The stories focused on various morality lessons, with the gang fighting each week a villain based on a particular concept (bigotry, pollution, greed, etc.). Similar to later series like “Captain Planet,” this show’s lessons could sometimes come off feeling fairly heavy-handed.

The theme song uses the phrase “the world would be so bright and gay.” While it’s for the sake of a rhyme, this is probably the latest TV show I can think of that used the word “gay” to mean “happy.” Already by this point, the word “gay” had shifted in public usage to its dominant modern meaning. Meanwhile, the 70s and 80s “Flintstones” spin-offs dropped the use of “gay” from the theme song for other words, usually “great old time.”

Thanks to the Warner Archive service, as well as the regular Warner Bros. home video releases, many of the individual shows of “Fred Flintstone and Friends” are available on DVD. “Goober and the Ghost Chasers,” “Yogi’s Gang,” and “The Pebbles and Bamm-Bamm Show” are all on DVD sets. The “Pebbles and Bamm-Bamm” set also includes the episodes made for “The Flintstone Comedy Hour.”

“The Flintstone Comedy Hour” isn’t available on DVD yet, though I imagine it’ll eventually see a release as one of the few remaining “Flintstones” series not on DVD. “Jeannie” and “Partridge Family” have yet to see a home video release, and there’s no word on whether Sony has any plans for such.