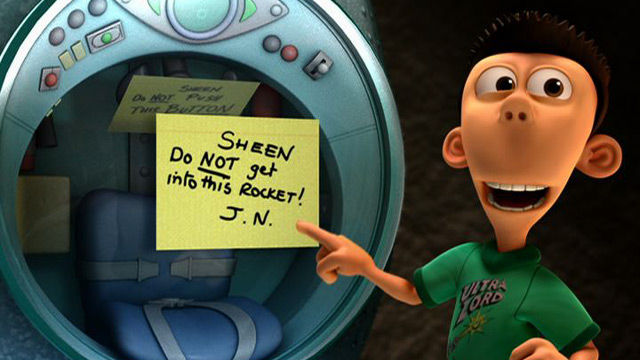 This week’s minorities in cartoons entry is Sheen Estevez, a character on the Nickelodeon series “Jimmy Neutron.”

Sheen‘s one of Jimmy’s best friends, and noted for being easily excitable, ditzy, and having a short attention span. He’s also got an all-consuming obsession with the fictional superhero UltraLord, leading Sheen to collect any and all merchandise, facts, etc., related to said character. Sheen of course got caught up in the various misadventures caused by Jimmy’s inventions, sometimes by Sheen’s own misuse of them.

Over the series’ run, Sheen developed a relationship with Libby, the best friend of Jimmy’s rival/eventual romantic interest Cindy Vortex.  Sheen’s ditzy nature also came in useful in the climatic scenes of the second crossover film with “The Fairly OddParents.”

Sheen’s father, Mr. Estevez, also played a role in one episode. The episode saw Mr. Estevez worrying about Sheen loving UltraLord more than himself. To resolve this, Mr. Estevez became, with Jimmy’s help, a costumed superhero (“El Magnifico”) to try to win Sheen’s respect. Fortunately, Sheen did love his father even more than UltraLord.

Some time after “Jimmy Neutron” ended its run, Sheen was given a starring role in a spin-off series, “Planet Sheen.” The series focused on Sheen being stranded on a distant planet, where he had various wacky adventures.

Jeffrey Garcia voiced Sheen. Garcia’s other voice acting roles include a character in the 2000s Nickelodeon series “Back at the Barnyard.”