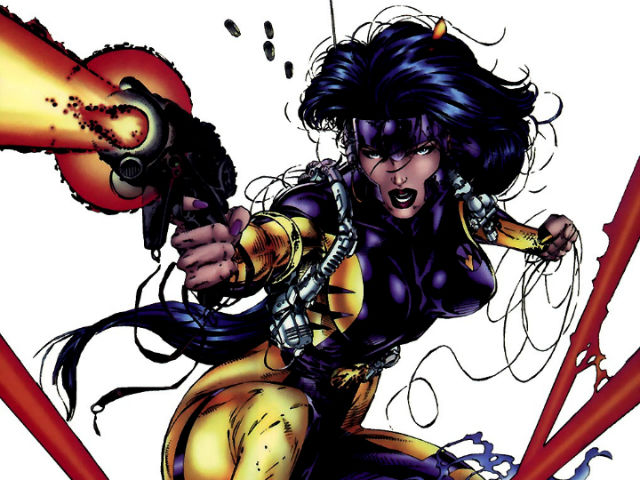 This week’s minorities in cartoons entry is Voodoo (real name: Priscilla Kitaen), a member of the superhero team WildCATs. Voodoo’s first appearance was in “WildCATS” #1 (August 1992). Priscilla was created by Brandon Choi and Jim Lee.

Priscilla’s backstory (as brief/clear as I can sum it up) is that she’s an exotic dancer who was rescued by the WildCATS after she was attacked by the Daemonites, aliens that can possess others’ bodies. Priscilla had a power called “The Sight,” which allowed her to tell if someone was possessed by a Daemonite, as well as separate them from their host bodies. This talent allowed her to join the team. However, it also made her a target by the Daemonites. After joining the WildCATS, Voodoo discovered she also had various mental powers, along with the ability to sprout claws from her fingers.

Voodoo later discovered that she also possessed Kherubim alien ancestry. The Kherubim are an alien race who’re the enemies of the Daemonites.

In 1999, DC bought Wildstorm, and made the line an imprint. Voodoo and her teammates were later folded into the DC Multiverse. The Wildstorm line was stated as being on a parallel Earth, “Earth-50.”

With the New 52 reboot in 2011, however, Voodoo and her team were folded into the mainstream DC Earth to coexist directly alongside Superman and Batman. Voodoo’s backstory and powers were also partially revamped. Voodoo’s book was one of the few New 52 titles initially meant to showcase minority characters (along with Static and Mr. Terrific’s books). Like those two, her book was cancelled after a dozen or so issues.

Voodoo appeared on a short-lived “WildCATs” animated series that aired from 1994-1995 on CBS. There, she’s not an exotic dancer (for obvious reasons), but a teenager with superpowers. Voodoo was voiced by Ruth Marshall. Marshall’s a Canadian actress who also appeared in the TV series “Flashpoint” and “Degrassi: The Next Generation.”