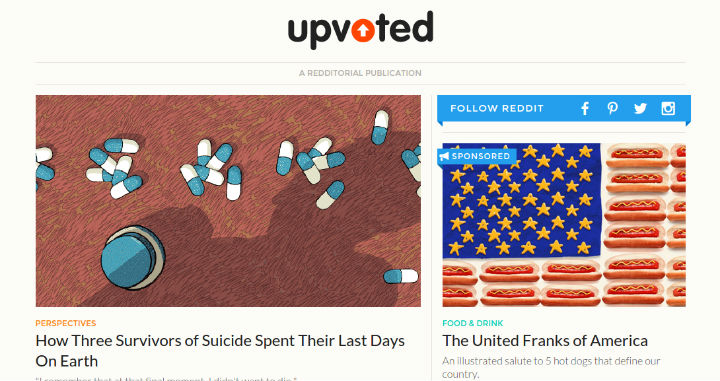 Reddit’s made this news this year for, well, not flattering reasons—for being a site that’s host to some of the worst aspects of the Internet. Of course, while Reddit was willing to die on the “free speech!” hill to protect its racist forums (that is, until they finally wised up and deleted some of the subreddits), that also didn’t make the site very appealing to advertisers.

However, it looks like Reddit’s finally figured out how to attract advertisers. The answer? Create an all-new site with curated content. As of today, Reddit’s opened Upvoted, a site featuring a curated set of popular news stories from Reddit’s various subreddits. The plan: Reddit’s hired a team of ten writers (led by former MySpace editorial director Vickie Chang) to write new material based on popular trending stories. 10 to 20 new stories will be posted per day, ideally increased in the future. The stories will also link back to the original Reddit threads they came from, but otherwise, upvoting, downvoting, and commenting on the stories won’t be allowed on Upvoted.

This last one’s quite a break from the usual Reddit libertarian attitude toward user input. Of course, this also ensures that Upvoted doesn’t fall prey to the worst aspects of Reddit’s peanut gallery, and keeps things general public (and advertiser) friendly. It also allows the site to cash in on its own popular content. Instead of banner ads or pop-ups, Upvoted plans to attract advertisers by offering to write sponsored content based on a particular topic.

However, Reddit doesn’t plan to leave its usual user base completely left out. Besides the links back to the original Reddit thread, there’ll also be a subreddit dedicated to Upvoted itself.

I’m not sure if this’ll attract enough increased advertiser attention to Reddit, but a new site with curated content that also pre-emptively segregates the worst aspects of Reddit? It can’t hurt to try.

What do you think of Upvoted?

How to block Twitter trolls in bulk
Facebook stores plain text passwords for years; Tumblr traffic drops post-adult material purge
How I promote my blog via social media
Facebook's "pivot to video" push is a bust... and now, the subject of a lawsuit