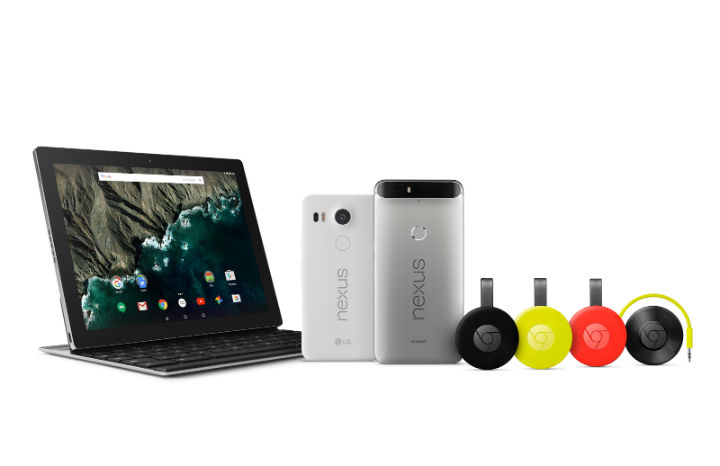 Earlier this week, Google announced a variety of new devices and services. Here’s my two cents on all the new Google stuff.

Google’s released an updated version of the Chromecast. Besides various software (and WiFi hardware) updates, the new Chromecasts will also come in a choice of colors: black, “coral” (red), and “lemonade” (yellow). I have no idea why the need for color choices for the Chromecast, seeing as it’ll be hidden behind a TV set.

Also introduced is Chromecast Audio, an audio-only unit that will stream any audio source. This includes Spotify, which finally offers Chromecast compatibility. It’s designed to attach to any pair of speakers.

The new Chromecasts will cost the same as the old ones, $35. While I’m fine with my Roku stick, the Chromecast should be appealing to others.

The Nexus 5X and 6P smartphones

The new Nexus line seems to correct the flaws of the Nexus 6. The cameras are improved, and there’s a choice of sizes besides “phablet.” However, they still don’t offer MicroSD card slots to increase capacity, so buying the 16GB 5X isn’t advised; the 32GB model Nexus 5X goes for $429.

Finances permitting, I’m looking to eventually buy a new phone, as my Nexus 4 is in need of replacement. The 32GB Nexus 5X could be a contender. The other phone I’m considering is the Motorola Moto G, which is much cheaper: a 16GB model goes for $219, plus it has a MicroSD slot and (basically) the Nexus 6’s camera. I don’t want a phablet-sized phone, or to spend a lot (otherwise I’d just get an iPhone on contract).

The Pixel line has usually been associated with very pricey Chromebooks, but now Google’s introduced the Pixel C. This is a tablet that comes with a 32GB model for $499 or a 64GB model for $599, plus a lockable keyboard for another $149. It also runs Android, rather than Chrome OS.

On the plus side, it sounds a lot cheaper than the Surface Pro 3, and especially the new iPad Pro. It also might appeal to the apparently-sizable number of people that want tablets-with-keyboards instead of a regular laptop, given the Surface’s moderate success. On the down side, the base model plus keyboard runs $650, which is pricey for a tablet; it’d be cheaper to buy a regular laptop or Chromebook at that price. Of course, the holidays are coming, so there might be price drops on the Pixel C, or even rival tablet-with-keyboard the Surface.

Some have expressed concern about Google ignoring the Chromebook with the new Pixel, but I doubt that’s the case. If anything, I’d expect more Android integration into Chrome OS in the future, similar to iOS’ and OS X’s crossover on the Mac side. Chromebooks are also selling well in education, and selling well enough overall that even Microsoft’s offering a similar Windows-based line of low-cost PCs to compete.

Google also plans to release its newest Android OS, Marshmallow, for its newest and recent phones. Unfortunately for me, it’s the end of the line for the Nexus 4—the oldest phone to get Marshmallow will be the Nexus 5. All the more reason I’d like a new phone.

Google Photos will get a few new features, including Chromecast support.

Do any of you plan to buy any of the devices or use any of the services above? Or have any feelings about Marshmallow, Google Photos, etc.?