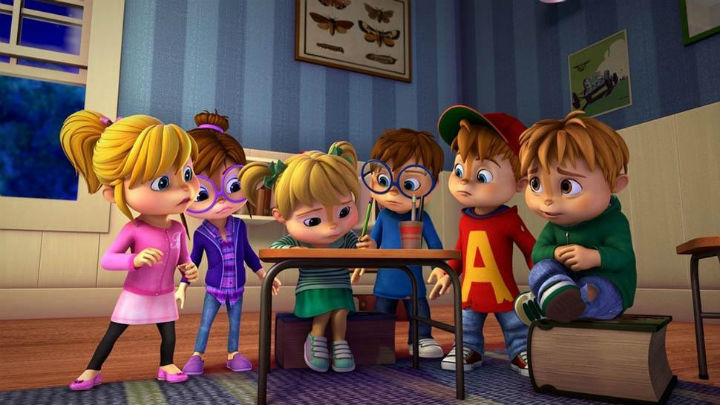 I’ve caught up on a few newer TV shows, so here’s my thoughts on one of them, the new “Alvin and the Chipmunks” TV series. Airing on Nickelodeon (in most of the world), it’s CGI animated, and debuted earlier this year.

Like others my age, I grew up watching the 1980s Chipmunks animated series, as well as reruns of the 60s series “The Alvin Show.” I still like the Chipmunks, though their live-action CGI films left a bit to be desired.

The new TV show (stylized in the title as “ALVINNN!!! and the Chipmunks,” per Dave’s famous yell) is basically an update of the 80s TV series. The show still focuses on the hijinks of Alvin, Simon, and Theodore, and their exasperated adoptive father/manager, David “Dave” Seville. Also present are the Chipettes—Brittany, Jeanette, and Eleanor.

Similarities to the 80s TV series include:

As for my verdict on the show, it’s OK. The stories are entertaining, and Simon (my favorite of the three boys) is still his usual self. Unfortunately, the show’s awkward character designs makes it hard to give it a complete thumbs up. I could get used to it, but imagine some adult viewers, especially those that grew up on the 60s or 80s series, might not be as patient or charitable—“uncanny valley” is one term I’ve seen bandied about.

From what I’ve read, the show’s been doing well on Nick since its premiere. While it’s not a Nick-owned series, it does seem a positive sign that kids still like the Chipmunks, as well as Nick having an animated series success that’s not SpongeBob or the Ninja Turtles.

Finally, here’s the opening credits for this new series.