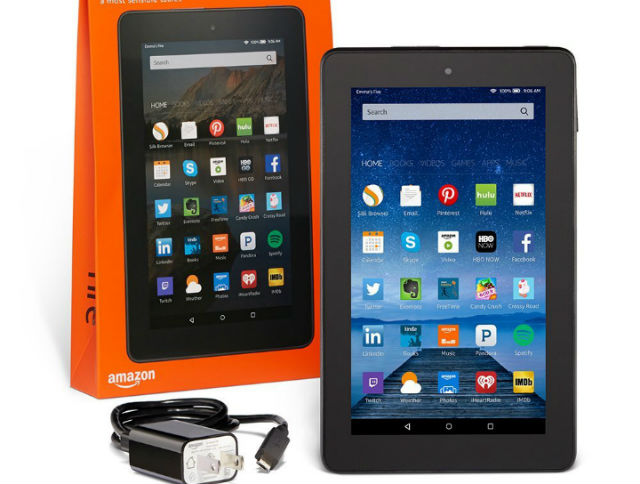 Amazon this week has announced it’s releasing a $50 entry-level version of its Kindle Fire tablet. For $50, you aren’t getting a higher-end tablet, such as Amazon’s Fire HD models. The new Fire’s specs are similar to what a typical tablet several years ago would’ve offered: 1GB of memory; 8GB of built in storage; a MicroSD slot for storage expansion; 1024×600 IPS display; 1.3Ghz quad-core processor; and low-end front and rear cameras. The new Fire also comes with the latest version of Amazon’s Fire OS, its variation on Android.

Amazon will also offer this tablet in a six-pack for $250; basically, “buy five, get one free.” There’ll also be a kid-friendly version for $100. The Fire Kids model will come in a thick protective case, a one-year subscription to Amazon FreeTime Unlimited (kid-friendly videos, etc.), parental controls, and a two year warranty. Under the warranty, Amazon will replace the Fire Kids tablet if it breaks, no questions asked.

Of course, Amazon’s tablets are tied to its services, including Prime Video, etc., and are all made with the hope you’ll buy Amazon’s stuff. The Fire OS also locks you somewhat into that variant of Android, though the audience for this tablet likely won’t care, unlike power users. On the plus side, it’s $50 for a tablet that’s from a trusted/liked company, unlike the similar priced awful off-brand tablets you’ll find on sale at Big Lots, at supermarkets, or on Black Friday sales.

For those who’re looking for a disposable tablet, something for kids, or are strapped for cash, the new Fire should be fine. However, those with more money to spend and not looking for an iPad should spend the extra few dollars for a better tablet. My suggestions would be a Samsung tablet, as mine’s worked well. If you’re OK with Amazon’s Fire ecosystem, I’d suggest the also-just-announced Amazon Fire HD 8 (with an eight inch screen) or the Fire HD 10 (with a 10.1 inch screen). The Fire HD 8 starts at $150, while the Fire HD 10 goes for $230.