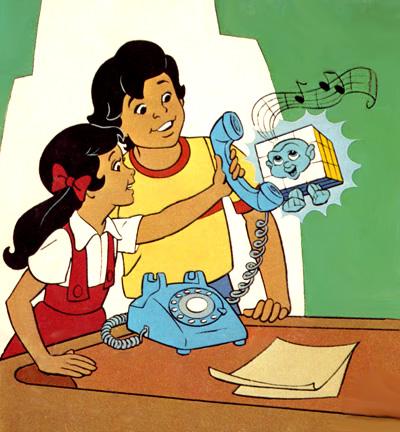 This week’s minorities in cartoons entry is definitely an unusual one: “Rubik, the Amazing Cube.”

This show aired on ABC for a single season (1983-1984), and was animated by Hanna-Barbera. Its companion show was “Pac-Man,” and aired as part of the package show “The Pac-Man/Rubik the Amazing Cube Hour.”

The show’s premise: a trio of Latino siblings named Carlos, Lisa, and Reynaldo Rodriguez find a magical Rubik’s cube. Rubik (the name he went by) would use his vast magical powers to help the siblings’ lives, resulting in various misadventures. They’d also occasionally thwart Rubik’s former owner, an evil magician. The Rodriguez family seem to be of Mexican descent (per the Christmas episode).

The show was written as part of the then-new craze of half-hour shows based on toys. Its mere existence is thanks to the Reagan administration’s then-recent deregulation of children’s TV advertising. As such, each episode involved a scene where Rubik would end up scrambled (which negated his ability to use his powers), requiring the Rodriguez kids to solve him. Unlike myself and many others in real life, the kids were apparently masters at solving the Rubik’s cube.

That said, “Rubik” might be one of the first (or very first) animated American shows to primarily star a non-stereotypical Latino cast. I searched Google for an earlier example/tried to think of one on my own, but nothing’s come to mind. The only thing that came to mind was the 1982 syndicated “Amigo and Friends,” but that’s an English dub of a 1970s series that aired in Mexico.

The show ran for one season of 13 episodes. It’s mostly gone unaired since the 80s. Save a single VHS tape, the show’s also not on home video.

Jennifer Fajardo voiced Lisa. Fajardo has no other voice credits besides “Rubik” and one other early 80s show.

Here’s the opening theme song, by none other than Puerto Rican boy band Menudo.