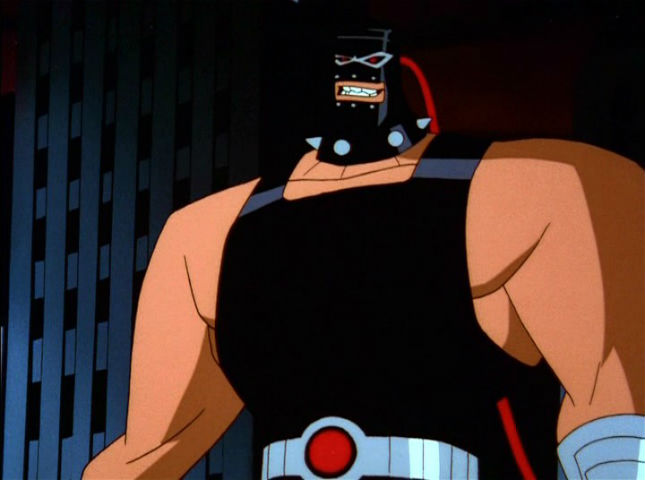 Bane’s backstory states he was born in the fictional, corrupt Latin American country of Santa Prisca. As a child, the future Bat-nemesis and his mother were forced to serve the rest of his missing father’s prison sentence. Eventually his mother died, and Bane grew up in the prison alone. He survived prison life through intense physical training, as well as a makeshift self-education using the prison’s books and a Jesuit priest.

By the time Bane reached adulthood, he had risen in stature to become the “king” of the prison. This led the prison to decide to test an experimental steroid (named “Venom”) on their most infamous prisoner. Bane found that the drug gave him vast, enhanced strength, but at the cost of needing to take doses regularly to avoid withdrawal side effects.

While incarcerated, Bane had heard stories about Gotham City and its Batman, which interested him enough to decide to go to America and confront the Dark Knight. Adding to this was he’d been haunted by dreams of a mysterious bat-creature.

He promptly broke out of prison, and eventually wound up in Gotham City, where he set about his plan to take down Batman. Bane’s first big act was to release the various prisoners from Arkham Asylum. Batman spent months rounding them up, at the cost of physically wearing himself down.

Returning home, Batman encountered Bane, who’d deduced Bruce’s secret identity. After an intense fight, the villain snapped Batman’s back in half, paralyzing Bruce. This moment’s been rehashed to death in various flashbacks, parodies, etc. As a result, Bane’s become known by the (overused) moniker “the Man who Broke the Bat.”

An ill-fated substitute Batman named Jean Paul Valley, also known as “Azrael,” briefly replaced Bruce. Jean-Paul behaved in an extremely violent manner toward his foes. Eventually, Batman got better and took his Batman role back… all in a much faster and less realistic fashion than his cohort Barbara Gordon.

Still, during his time as Batman, Azrael managed to defeat his foe, and sent the criminal to prison. Since then, Bane’s become one of the regularly appearing Batman rogues, as well as periods depicting him as a mercenary, occasional Batman ally, and anti-hero. Comics Alliance’s “Comics Everybody” feature humorously sums up Bane’s backstory and subsequent stories.

Bane’s most noteworthy feature is his vast strength, which is further amplified by taking the super-steroid “Venom.”

Despite his background and appearance, he’s also a very educated and highly skilled tactician. This includes knowledge of several languages, including English, Spanish, Portuguese, and Latin.

In the direct-to-video movie “Batman: Mystery of the Batwoman,” Hector Elizondo voiced Bane.

Bane’s also become a regular in video games and other merchandise.

However, Bane’s most prominent media appearance has been as the main villain in the 2012 Christopher Nolan Batman film, “The Dark Knight Rises.” Actor Tom Hardy played the villain.