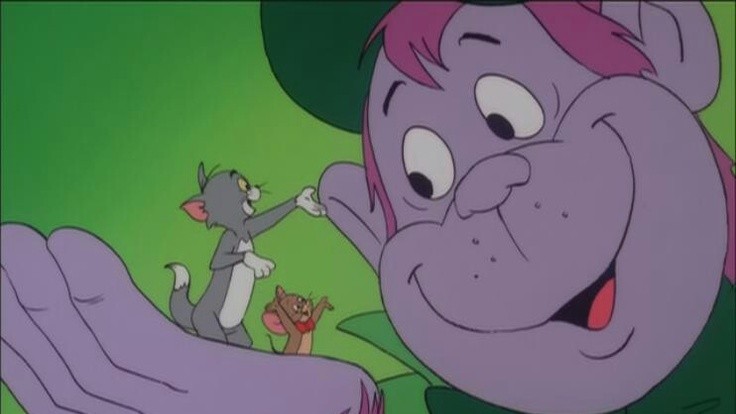 Today’s package show post covers the mid-70s revival of “Tom and Jerry.” It also covers the addition of several other new characters (sort of, in one case), Grape Ape and Mumbly.

The Oscar-winning cat-and-mouse duo had been theatrical mainstays between their 1940 debut and the final batch of shorts (made under Chuck Jones) ending in 1967. The duo’s shorts had also been airing on television since 1965 (per Wikipedia). In 1975, their original creators, Hanna-Barbera, obtained the rights to their creations from MGM for Tom and Jerry’s first made-for-television series.

The original shorts are famous for their high levels of slapstick violence. However, 1970s children’s television standards ensured that wouldn’t be the case here. Instead, Hanna-Barbera opted to take the opposite tack: to make the traditionally feuding duo best friends in most of the segments.

The duo were competitive adversaries (akin to their old shorts) in a few episodes involving contests/sports; the opening titles also showed traditional chase antics. However, for the most part the default was the duo as friends. Often, Tom and Jerry dealt with some mutual threat; these included the series’ incarnation of Spike the bulldog, or trying to stop some sort of crime.

The show’s other major change is Jerry gaining a red bow tie. Said design change is also seen in the early 90s series (also by Hanna-Barbera) “The Tom and Jerry Kids.”

After the show’s cancellation, the episodes were folded into the syndication package for “Tom and Jerry,” airing alongside the theatrical shorts. This is still the case today, with the shorts occasionally seen on Boomerang. The shorts also are occasionally seen aired in their own half-hour syndication incarnation, “The Tom and Jerry Show.” (Not to be confused with the 2014 TV series of the same name.)

A less violent cat and mouse

While this version of “Tom and Jerry” has its fans, some animation purists take a dim view of this version of the cat and mouse. The duo lack their traditional slapstick violence and animosity; there’s also the 70s-era TV animation budget.

The second-season “Simpsons” episode “Itchy & Scratchy & Marge” parodies toning down traditionally violent cartoon characters. After Marge’s protest efforts to tone down Itchy and Scratchy succeed, the duo are shown behaving as best pals. It’s akin to an exaggerated version of the 1975 Tom and Jerry shorts—drinking lemonade together, going dancing, etc. Needless to say, Springfield’s children hate the shorts and tune them out. Eventually, Itchy and Scratchy return to their usual hyper-violent selves.

Of course, Itchy and Scratchy are actually parodies of now-obscure 1950s Paramount/Harvey characters Herman and Katnip; they were Tom and Jerry knockoffs with amplified violence/less wit.

Here’s the opening for the syndicated “The Tom and Jerry Show.”

The “Great Grape Ape,” or Grape Ape as he’s usually called, was a 40 foot (12 meter) tall purple colored gorilla, whose personality was eager, but childlike/not very bright. He was prone to repeating his name as a “catch phrase.” The Grape Ape possessed vast strength befitting his size, though his size alone often scared others (typical reaction: “Yiii! A go-ril-ril-ril-ril-laaa!”). It didn’t help that Grape Ape sometimes did ill-considered things, such as jump into a body of water when swimming (causing a mini-tidal wave), or hurricane-level sneezes. Grape Ape’s best friend was Beegle Beagle, the straight man of the duo, who tried to keep Grape Ape’s antics under control.

While Grape Ape debuted in 1975, his inspiration of course came from famous movie ape King Kong. It might’ve also been in anticipation for the much-hyped 1976 “King Kong” remake.

Marty Ingells voiced Beegle. Ingels also voiced Hanna-Barbera’s Autocat (in the “Motormouse and Autocat” shorts from 1969’s “Cattanooga Cats”), as well as their version of Pac-Man.

Grape Ape went on to appear in other Hanna-Barbera productions over the years as cameos, most prominently in “Scooby’s All-Star Laff-alympics.” There, he’s the only post-early 60s character on the “Yogi Yahooeys,” the funny-animal-dominated team in the mock-Olympic games. His sheer size was both a help and a hindrance to the team. A running gag saw him paired him up in two-man events with the smallest team member, duckling Yakky Doodle.

The giant gorilla’s apparently made some impression. Grape Ape’s been seen or referenced in other media up to the present day. Shows such as “Robot Chicken” and “Harvey Birdman” featured Grape Ape. The gorilla also appeared alongside other cartoon characters in a MetLife insurance ad.

Here’s the opening for the syndicated “The Great Grape Ape Show.”

Mumbly was a retooled version of Hanna-Barbera’s own Muttley from “Wacky Races.” The retooling (adding a trench coat, lighter fur color, and different name) came since at the time, Muttley’s rights were tied up with the co-producers of “Wacky Races.”

Mumbly’s own show was a parody of 70s detective TV shows, most prominently “Columbo.” In this series, Mumbly solved crimes as a police detective, all while giving the trademark Muttley snicker.

After the series ended, Mumbly apparently decided to turn to evil, as he was shown as the team captain of the “Really Rottens” in “Laff-alympics.” His teammate was the “Dread Baron,” a helmet-wearing, differently-voiced, rights-cleared version of Dick Dastardly.

Post-“Laff-alympics,” Mumbly and the Baron are only seen once more, in the 1987 made-for-TV film “Yogi Bear and the Magical Flight of the Spruce Goose.” Here, the Baron’s voiced by Dick Dastardly’s usual voice actor, Paul Winchell. Otherwise, Hanna-Barbera opted to use the actual Muttley and Dick Dastardly as their go-to villains for 80s/90s productions, such as “Yogi’s Treasure Hunt.”

Here’s the opening credits for “The Mumbly Cartoon Show.” If you’ve noticed by now, Hanna-Barbera really recycled to death the music, lyrics, and opening credits art styles for all of these shows!

Despite Tom and Jerry’s popularity, their 1975 revival’s not been released in its entirety to a DVD set; neither have Grape Ape or Mumbly. Tom and Jerry and Grape Ape have had a few episodes released to the “Saturday Morning Cartoons: 1970s” DVD set.