Godzilla‘s been the famed cinematic “King of the Monsters” since his 1954 debut. By the late 70s, Godzilla’s movies had become an American TV staple, no doubt prompting Godzilla’s studio (Toho) to license this animated adaption.

Debuting on NBC in 1978, “The Godzilla Power Hour” went through various incarnations, before finally leaving the airwaves in 1981. “Godzilla”‘s replacement in its final timeslot was the fall 1981 debut of “The Smurfs.” Despite the Smurfs being as polar opposite in tone from Godzilla as you can get, the former quickly became one of the new decade’s biggest animation hits. 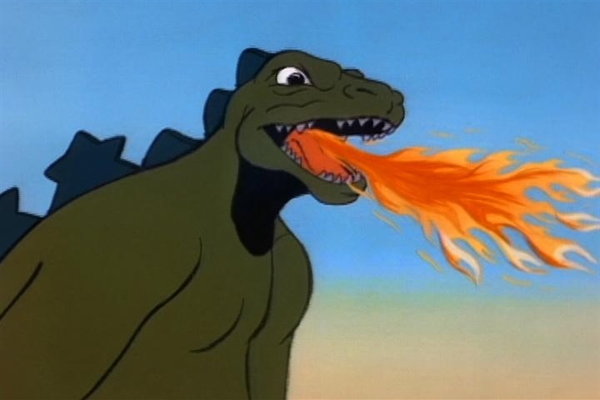 Godzilla serves as the main hero in this series. The human stars of this show are the crew of the Calico, a scientific exploration vessel. Said crew members include: Captain Carl Majors; scientist Dr. Quinn Darian; Brock Borden, an African-American assistant of Dr. Darian, as well as Capt. Major’s first mate; and Dr. Darian’s teenage nephew Pete.

Also present is the addition of Godzooky, an obligatory 70s-style comic-relief animal sidekick. In this case, Godzooky’s a smaller-sized monster said to be (somehow) the nephew of Godzilla. Godzooky could fly using small wings under his arms.

The Calico crew can summon Godzilla when needed with either a special signaling device or through Godzooky’s own means. Various large monsters appear as the series’ main foes. Of course, the assorted giant-sized monsters also give Godzilla someone to fight. Another alteration for this series is that Godzilla now possesses fire breath and Superman-style heat vision, instead of his traditional atomic breath. I wonder what the reason for that change was…easier to animate? Waning public enthusiasm for nuclear power, despite Godzilla’s ties to such?

Two seasons with 26 episodes of “Godzilla” were produced.

Finally, here’s “Godzilla”‘s theme song, which Godzooky aside, is pretty catchy. (“Up from the depths, 30 stories high…”)

Jana of the Jungle

The other half of the “Power Hour” is “Jana of the Jungle.” The 13 episode series featured Jana, a young woman who functions as “Tarzan” in a South American jungle. Jana has several animal sidekicks, plus a few human ones—wildlife biologist Dr. Ben Cooper and native South American Montaro. The overall plot of the show: Jana is orphaned at a very young age after she and her father are shipwrecked in an accident. Rescued by Montaro, Jana grows up in the jungle, while developing her survival skills. Jana spends her time endlessly searching for her father, who she feels is still alive. The heroine also possesses a disc-like necklace, which she can throw like a weapon.

Jana made one appearance outside of her own show, in a cameo in “Yogi’s Space Race.” Yes, it was as out of left field an appearance as it sounded, even to Yogi and the gang.

Here’s the opening to Jana’s show.

It wasn’t long into its run—a few months—before the show was expanded into “The Godzilla Super 90,” a 90 minute long show that added “Jonny Quest” reruns. This version ran through September 1979, after which “Godzilla” became a stand-alone half-hour show.

“Godzilla” went through another new pairing in December 1979; it was matched up with the “Super Globetrotters” (the Harlem Globetrotters as superheroes). This version ran through September 1980.

September 1980 saw “Godzilla” get yet another new package show partner, “Dynomutt.” Also appearing in this series were reruns of 1971’s “The Funky Phantom,” one of the first knockoffs of the “Scooby-Doo” formula. This version ran through November.

November 1980 saw the final repackaging of “Godzilla,” now stuck supporting reruns of 1974’s “Hong Kong Phooey.” This incarnation ran through May 1981, after which “Godzilla” spent his final few months on NBC as a half-hour show. “Godzilla”‘s since aired in syndication/occasionally on Boomerang as a half-hour series.

As you can see, “Godzilla” is not only the king of the monsters, but also the king of being paired up with other shows.

The first season of “Godzilla” has been released to three DVDs. It’s also available on Amazon’s streaming video services. For some reason, the second season of the show isn’t available on DVD or streaming video. To date, “Jana of the Jungle” hasn’t seen a home video release, though the show sporadically appears in syndication/on Boomerang.