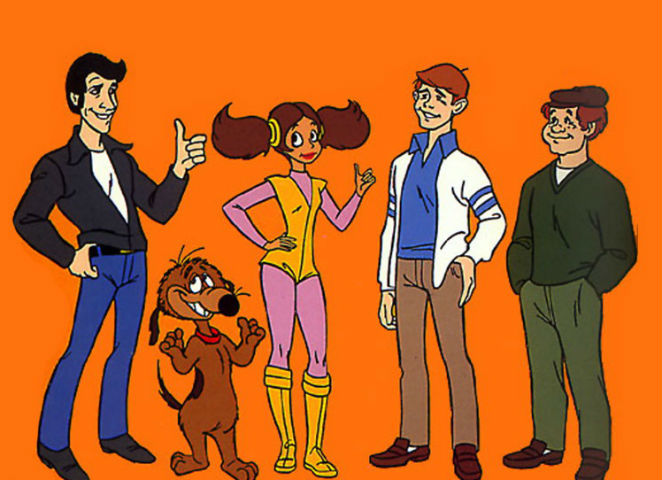 Time for another look at a package show. This time, it’s a spinoff based on the “Happy Days” franchise at large: “The Mork & Mindy/Laverne & Shirley/Fonz Hour.”

This show is a collection of several previous animated spinoffs of “Happy Days,” “Mork & Mindy,” and “Laverne & Shirley.” All three were then-popular primetime sitcoms on ABC. Given that, I’ll look at the package show’s segments as well as a predecessor series.

Fonz and the Happy Days Gang

The first animated spinoff was “Fonz and the Happy Days Gang.” Debuting in 1980, it aired through 1982 as a stand-alone half-hour show, for two seasons of 24 episodes.

The series‘ premise: Cupcake, a time traveler from the 25th century, saw her time machine break down in 1950s Milwaukee. There, several of the “Happy Days” gang got trapped in her time machine. The series thus saw said time machine bouncing from era to era, as the gang tried to find their way back to 1957 Milwaukee. Famous radio DJ Wolfman Jack did the show’s opening narration.

Fonz, Ralph, Richie, and Cupcake were the star human characters. However, the show added a new character, “Mr. Cool,” Fonz’s pet dog. Mr. Cool was, similar to the animated “Richie Rich”‘s Dollar, a bumbling dog who tried and failed to emulate his owner.

Cupcake had magic powers, but she also was almost as inept as Mr. Cool. Unfortunate, given she was the only woman cast member. Of course, Fonz kept all of his cool abilities from the live-action sitcom, partially amplified thanks to his now-animated nature.

Despite the bizarre premise, the show to its credit put a slight bit of thought into having the characters visit times and locales not often seen in time-travel stories. One example is an episode where the gang time-travel to 12th century Timbuktu in Africa. Oddly, they never visited Christopher Columbus, despite Arthur “the Fonz” Fonzarelli being Italian-American.

The show’s main other virtue is that the characters’ original actors did their own voices—that’d include Henry Winkler, Ron Howard, and Donny Most, of course. The show also featured animation veteran voice actor Frank Welker as Mr. Cool and actress Didi Conn (who also appeared in the 80s on the primetime sitcom “Benson”) as Cupcake.

Laverne & Shirley in the Army

A spin-off of “Laverne and Shirley,” this one cashed in on the popularity of 1980 Goldie Hawn film “Private Benjamin” by having the two roommates join the army. As privates, the two Wisconsinites fell under the command of a talking pig named Sgt. Squealy. Similar to the above “Happy Days” show, Penny Marshall and Cindy Williams (Laverne and Shirley respectively) did their own voices for this spin-off.

The show debuted in 1981, and aired 13 episodes. For its second season as part of “The Mork & Mindy/Laverne & Shirley/Fonz Hour,” the show added the Fonz and Mr. Cool to the cast. (Presumably, those two had finally made it back to 1957 Milwaukee, after all.) Fonz and his dog worked as the camp’s motor pool mechanics.

Despite a retitling to “Laverne and Shirley with the Fonz,” the show’s second season of episodes was ultimately cut short at only eight episodes. Searching online, I’ve read conflicting reasons why. The most likely possible reason: Cindy Williams abruptly quit the live-action sitcom early in the filming of the 1982-83 season. Shirley was subsequently quickly written out of the series; the remainder of the season, as well as the show’s opening credits, were juggled to center around Laverne. It turned out to be the final season for the long-running show, with its last episode airing in May 1983.

In 1982, an animated “Mork & Mindy” debuted, and was combined with the above “Laverne & Shirley with the Fonz” show for the package show “The Mork & Mindy/Laverne & Shirley/Fonz Hour.” Mork’s segment saw its two lead stars voiced by their primetime actors, marking Robin Williams’ voice acting debut in animation.

The animated version revised the stars into being teenagers attending high school, with Mork otherwise behaving in a similar fashion as his primetime self. Per the Hanna-Barbera norm, Mork got a pet too in this version, a six-legged pink dog named Doing. “Mork” saw a season’s worth of episodes produced, before the entire hour and all of the franchise’s animated incarnations were canceled at the end of the 1982-83 season.

Since its cancellation, the “Hour””s segments, as well as “Fonz and the Happy Days Gang,” have aired off and on in syndication. To date, none of the above shows have seen a release to DVD.

As the “Happy Days” franchise is owned by CBS/Paramount, I assume any DVD release would be up to them, and not Time Warner/the Warner Archive program. That’d be similar to CBS/Paramount’s treatment of the Filmation-animated “Star Trek: The Animated Series.”

However, the entire run of “Fonz and the Happy Days Gang” is available on Hulu’s streaming service.