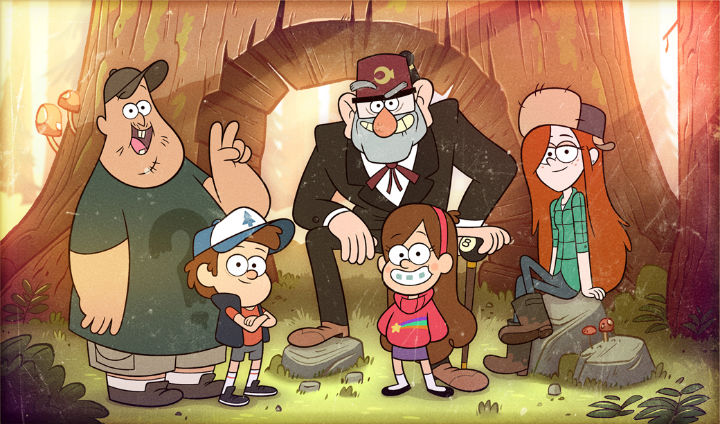 This week’s minorities in cartoons entry is “Gravity Falls,” an animated series that debuted on Disney Channel in 2012. The series currently airs on Disney XD.

“Gravity Falls” focuses on 12-year-old twins Dipper and Mabel Pines. The two have been sent by their parents to spend the summer with their cranky great-Uncle Stan, or “Grunkle Stan” as the kids nickname him. Stan runs a second-rate paranormal-themed tourist trap called the “Mystery Shack,” located in the fictional small town of Gravity Falls, Oregon.

After the twins arrive, Stan soon has his grand-niece and -nephew working at the Shack. However, the twins soon discover the town itself is full of strange goings-on of the paranormal, supernatural, and monstrous variety, with secrets everywhere.

Dipper eventually comes into possession of a journal that describes the various oddities in Gravity Falls. The journal is written by a mysterious author (until the author’s revelation in a second season episode). Said journal helps the twins in dealing with the town’s phenomena. Pretty much every conspiracy theory, supernatural or horror element one can think of has been referenced or parodied over the series’ run.

The show overall feels like “The X-Files” meets “Regular Show” or “Steven Universe.” The two twins’ personalities are opposites. Dipper’s serious minded and fairly intellectual, at the expense of not being overly popular. One episode shows he enjoys this show’s version of “Dungeons and Dragons.” Mabel meanwhile is perpetually cheerful, if flaky and non-cerebral. She enjoys boy bands, playing with her pet pig Waddles, and so forth.

“Gravity Falls” aired from 2012 to 2016 on Disney XD, attracting both kid and adult fans. Elements that built the show’s popularity include the characters themselves, the series’ strong continuity/running plots, and the mystery/supernatural elements.

Supporting characters in the series include:

Dipper is voiced by Jason Ritter.

Soos is voiced by Alex Hirsch. Besides being the creator of “Gravity Falls,” Hirsch also voices Grunkle Stan and several other characters.

Candy is voiced by Niki Yang, a storyboard artist who also does voicework on “Adventure Time.”

Sheriff Blubs is voiced by Kevin Michael Richardson. Richardson does a sizable number of voices in animation, including Cleveland Brown‘s son on “Family Guy.”

"Danger Mouse" is coming back to TV
How to save money on comics
Thoughts on the 2014 Oscars
Cartoons at the box office: Godzilla squishes Spider-Man (and stomps everyone else)
Share this post