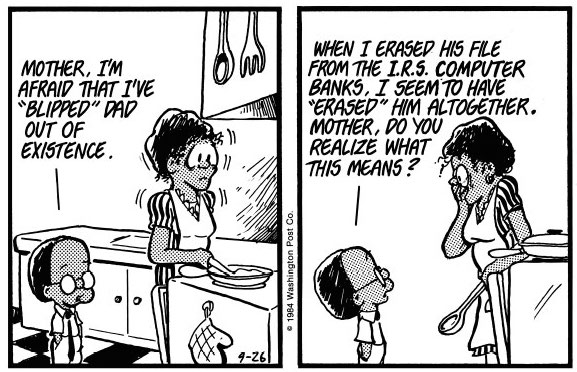 “Bloom County” is Berkeley Breathed’s classic 1980s comic strip that satirized that decade’s social and political culture, in a hilarious manner. However, since Breathed ended its run at the decade’s end, it’s also partially become a period piece. His subsequent strips, the 90s’ “Outland” and 2000s’ “Opus,” weren’t as well received, and folded with little fanfare.

Now, however, Breathed is once again back in the cartooning spotlight, reviving the original “Bloom County” as a webcomic named “Bloom County 2015.” (I assume he’ll change the name once 2016 rolls around?) It looks like he’s using his Facebook page to post new strips, as well as through GoComics.com.

I gather for this revival’s purposes Breathed’s ignoring “Outland” and “Opus,” plus the conclusion of the original “Bloom County” where everything in-universe was bought out by Donald Trump.

There’s no indication how often new strips will be posted, but it’s nice to see one classic comic’s back. I wonder how it’ll fare compared to now-established webcomics, or what millennial readers will make of Bill and Opus. Of course, there’ll be plenty of stuff to make fun of, given the aforementioned Mr. Trump’s also back in the news, now with plans to run for president in 2016.