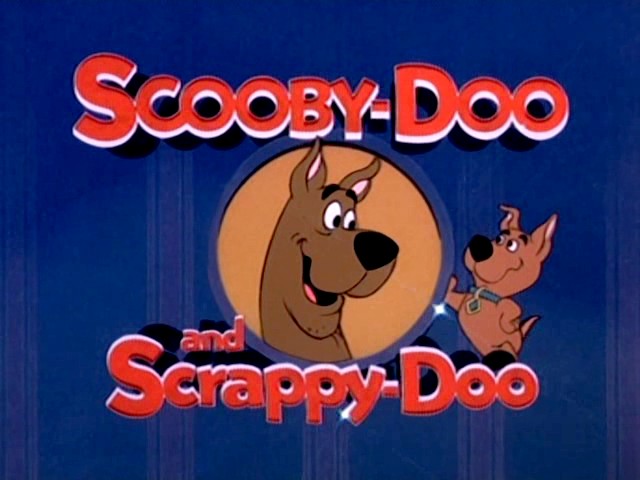 Today, I take a look at the various 1980s Scooby-Doo package shows. Specifically, “The Richie Rich/Scooby-Doo Show” and “The Scooby and Scrappy-Doo/Puppy Hour.”

In 1980, ABC debuted “The Richie Rich/Scooby-Doo Show,” a package show consisting of Harvey comics character Richie Rich (in his animation debut) and Scooby-Doo. It’s one of the few Scooby-Doo series to date where the Great Dane got second-billing; “Shaggy and Scooby-Doo Get a Clue” in the 2000s was another.

After two seasons, for the 1982-83 TV season Richie Rich was moved into a new package show with Pac-Man and the Little Rascals. Scooby was given a new hour-long package show, “The Scooby and Scrappy-Doo/Puppy Hour”; the new supporting segment featured a new character, Petey the Puppy. This show ran for just one season.

I’ve written about Richie before, so see this previous post for my thoughts.

On the heels of 1979’s introduction of Scrappy-Doo in “Scooby-Doo and Scrappy-Doo,” for some reason it was decided to lose the series’ since-day-one mystery-solving format entirely. Instead, the second and third seasons of this series switched to a series of six- or seven-minute shorts (three per half-hour) which only featured Shaggy, Scooby, and Scrappy.

The shorts were basically seven minute long versions of the slapstick Shaggy/Scooby-versus-the-monsters chase segments we see in traditional Scooby-Doo shows, only now with Scrappy in tow. The shorts also usually featured actual monsters, aliens, or the like, and initially no mysteries.

A typical example is the episode “Scooby-Doo 2000.” The plot: Shaggy and the dogs are working as clock cleaners. Somehow, they get caught up in the clock’s hands, which spin at such speed they’re sent into a “Jetsons”-like future. Once there, they visit a futuristic department store; they spend most of the remainder of the short running from a mechanical toy ape. Granted, Shaggy and Scooby’s first reaction after overcoming the time-travel shock is to look for food in said department store.

I suppose it’s not the last time some network execs got the idea of “make the comedy relief segments into the whole show,” as seen by the 2010s debut (and success) of “Teen Titans Go.” Like “Teen Titans Go,” I assume the new Scooby-Doo format was a ratings success, as this was the dominant Scooby format for the next few seasons. However, I wonder if it’s these shorts’ tone and lack of actual mysteries tempering things that partly led to Scrappy’s negative modern reception.

The final season (as “The Scooby and Scrappy-Doo/Puppy Hour”) saw a partial shift back to a mystery/crime-fighting format. New segments saw Shaggy and the dogs running Shaggy’s uncle Fearless’ detective agency. Another new segment was “Scrappy and Yabba-Doo,” which saw Scrappy staying out west with Scooby’s grey-furred cowboy brother, Yabba-Doo, and Yabba’s owner, Deputy Dusty. Unlike his brother, Yabba spoke with a normal (though cowboy-style) voice, and wasn’t a coward.

After airing as repackaged reruns (under the titles “Scary Scooby Funnies” and “Scooby’s Mystery Funhouse”), the shorts finally left ABC for good. In syndication, they all air along with the half-hour “Scooby-Doo and Scrappy-Doo” episodes under that name. The shorts’ episodes slightly modify the opening to eliminate the (absent) Fred, Daphne, and Velma.

Petey the Puppy was the star of a series of animated specials produced for ABC’s “Afterschool Special” series. Said shorts proved popular enough to get Petey his own Saturday morning series. His show (called “The Puppy’s Further Adventures” in syndication) focused on the adventures of Petey and his canine pals as they searched for their owner.

Here’s “The Richie Rich/Scooby-Doo Show”‘s opening credits. The current syndicated “Richie Rich” episodes use a modified version of this opening.

Here’s the opening credits for “The Scooby and Scrappy-Doo/Puppy Show.”

The half-hour “Scooby-Doo and Scrappy-Doo” episodes are available on DVD under a season box set.

The first seven episodes of “The Richie Rich/Scooby-Doo Show” were released to a DVD set years ago; however, no further releases have been made since. The shorts otherwise have only had a handful of episodes released to various single-disc Scooby-Doo DVDs, mixed with other Scooby-Doo incarnations.

Fortunately, the entire series of shorts is available on iTunes and Amazon Video. However, Amazon’s categorization of the shorts is a bit erroneous and confusing. Amazon lists “Scooby-Doo and Scrappy-Doo” as “five seasons,” i.e. all three seasons of Scooby shorts above, plus the first half-hour-episode season. They also oddly include “The New Scooby and Scrappy-Doo Show,” the follow-up series that brought Daphne and the mystery solving format back.

Still, at least they’re all actually available on video. The same can’t be said of Richie Rich’s Hanna-Barbera-produced show (only some of the episodes are on DVD/digital video), or the Puppy’s show, which apparently isn’t on DVD/digital video period.