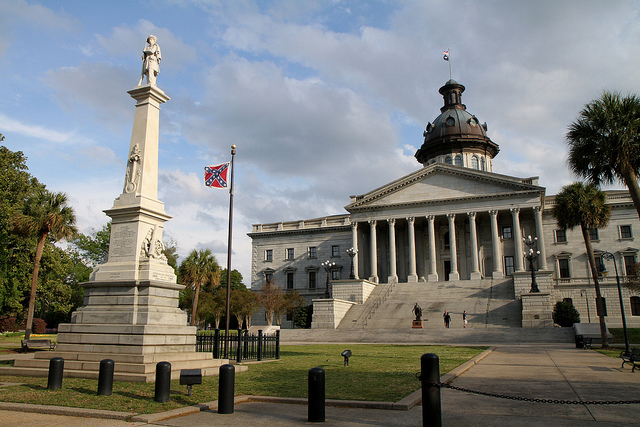 Last week saw yet another horrific mass shooting in the United States, this time at a historically Black church in Charleston, South Carolina, with nine people killed. The gunman’s been caught, but when South Carolina’s government buildings lowered the US flags to half-mast, news stories (and Twitter) noted the Confederate flag is still flying over South Carolina government buildings, as shown in this post’s featured image above. This has led to a discussion over, well, the inappropriateness of having the Confederate flag on government buildings. (As for doing something once and for all about the US’ Wild West mentality toward firearms, I’ll link to this “This Modern World” comic, which sums up my feelings, unfortunately…)

Various politicians, including conservatives such as former presidential candidate Mitt Romney, have started speaking out against the use of the Confederate flag. Now, online retailers are also starting to have second thoughts about selling Confederate flag merchandise. Wal-Mart, Sears, and eBay have withdrawn sales of such merchandise, but the titan of online sales, Amazon, has now announced it’s pulling sales. This is in spite of Confederate flag sales spiking before the removal. My searching Amazon for “Confederate flag” (and “rebel flag”) just turn up the good ol’ Stars and Stripes, plus several non-Confederate state flags.

For obvious reasons, you won’t see me being a Confederate flag enthusiast. Unsurprisingly, the usual online racists, trolls, etc., are up in arms over this public souring on the Civil War relic. But I imagine the biggest online retailer will survive the world of the 21st century just fine without selling Confederate flag-themed comforters.

A look at Amazon in the 2010s
RIP Radio Shack
Comixology removes in-app purchasing from iOS apps
Favorite articles roundup for the week of September 13, 2019
Share this post