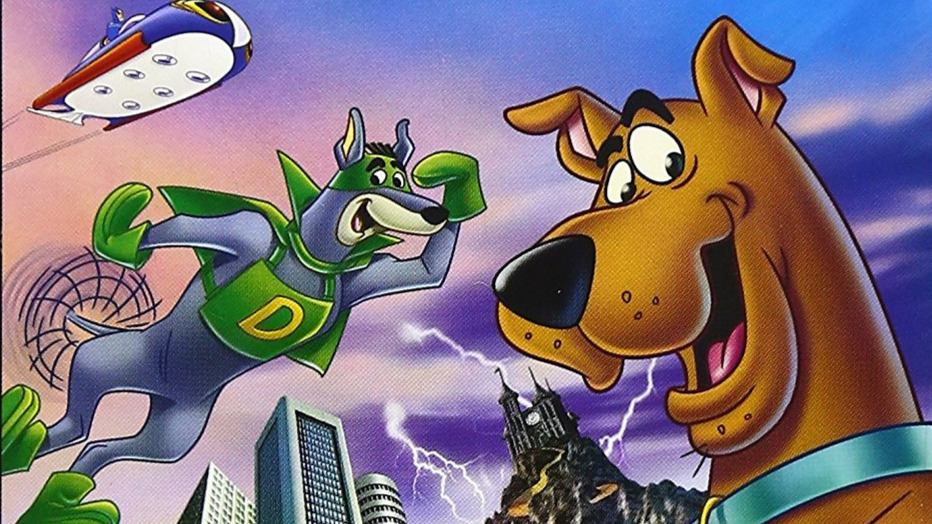 Today’s package program/cartoon nostalgia look is “The Scooby-Doo/Dynomutt Hour.” This show aired on ABC during the 1976-77 TV season. As the name indicates, the stars are Scooby-Doo (in his first new episodes since 1973’s “The New Scooby-Doo Movies”) and newcomer Dynomutt.

The following 1977-78 season saw the series replaced by a new package show, “Scooby’s All-Star Laff-alympics.” New Scooby episodes were made, both under the “All-Star Laff-alympics” name and as part of a short-lived third season of the original “Scooby-Doo, Where Are You!” “Dynomutt” aired a mix of reruns and new episodes. In the 1978-79 season, the Dog Wonder’s portion was dropped, with the show’s name changed to “Scooby’s All Stars.”

As noted above, this was Scooby’s first new series in a few years. Combined with the “Laff-alympics” and “Where Are You” revival episodes, these make up the last of the pre-Scrappy-Doo Scooby episodes. The combined episodes have aired since 1980 under the syndicated title “The Scooby-Doo Show,” with 40 episodes total (making it one of the longer-lasting Scooby incarnations).

These episodes see the gang solving mysteries in the usual traditional format. Among the more noteworthy monsters from this version of the show include:

This series also saw the introduction of Scooby-Doo’s dopey country cousin, Scooby-Dum. Dum was the first of the numerous Doo family relatives to appear through the rest of the 70s and 80s incarnations of the franchise. Dum lived up to his name—for starters, he’d keep trying to help “solve” the mystery after it ended. While Scooby-Dum only appeared in a handful of episodes, he frequently appeared on “Laff-alympics,” as a teammate on the Scooby-Doobies. One episode featured a distant cousin of both Scoobys, canine actress Scooby-Dee.

After this series, Hanna-Barbera apparently decided that “Doo” was a family last name, and so gave different first names to Scooby’s relatives in all future spin-offs. 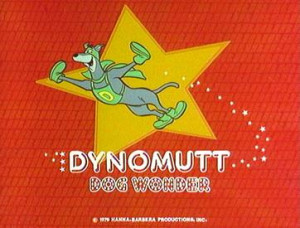 Dynomutt, “Dog Wonder,” is a goofy, bumbling robotic dog superhero. He’s the sidekick to the stoic, Batman-like superhero of “Big City,” Blue Falcon. Similar to the later 80s hero Inspector Gadget, Dynomutt was capable of pulling all sorts of robotic, mechanical gadgets from his body, as well as stretching his limbs.

The two heroes defended Big City from all sorts of supervillains. This was in spite of Dynomutt’s “malfunctions” and bumbling. As such, Blue Falcon sometimes referred to his sidekick as “Dog Blunder.” The Scooby-Doo gang, who apparently live within driving distance of Big City, appeared in a few episodes to help the heroes.

Blue Falcon never had an origin story, but did have a secret identity, millionaire art dealer Radley Crown. Radley lived in a penthouse apartment, which also secretly doubled as the Blue Falcon’s headquarters. Dynomutt lived with Radley, and served as his assistant/companion.

After the late 70s, “Dynomutt” entered syndication under its own title. Blue Falcon and Dynomutt continue to make various appearances in modern productions, starting with co-starring in a hilarious episode of “Dexter’s Laboratory.” The duo also appeared on “Scooby-Doo: Mystery, Incorporated.” There, Blue Falcon was a Frank Miller-Batman-style grimdark superhero, despite Dynomutt being the same. A direct-to-DVD movie, “Scooby-Doo: Mask of the Blue Falcon,” was made in 2012. Oddly, that film treated the superheroes as in-universe fictional characters. 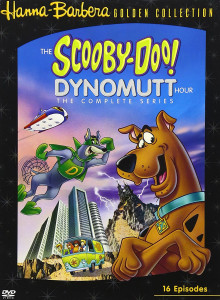 The entire “Scooby-Doo/Dynomutt Hour” season is available on DVD as a box set. Disappointingly, the DVD set use the standalone “The Scooby-Doo Show” and “Dynomutt” opening/closing titles. The aforementioned “third season” of “Scooby-Doo, Where Are You?” received a DVD set under that name, as well as inclusion in the “complete series” set for that series. Oddly, the remaining Scooby-Doo episodes that aired under the “Laff-alympics/All-Stars” banner are either not on DVD or scattered across a handful of single-disc DVDs.

On digital video, however, the entire “Scooby-Doo Show” package is available on iTunes and Amazon. Amazon carries all 40 episodes split into two seasons under “The Scooby-Doo Show” name.

Here’s the opening credits for “The Scooby-Doo Show.” It’s anyone’s guess just what it is that “Shaggy is a-doing what he does the most”… eating? Panicking? Running from monsters?

Here’s the opening credits for “Dynomutt.”

And here’s the opening for the original hour-long series. Or at least its audio, spliced together with some old 16mm film footage of the opening. And even that’s spliced with some stock footage/photos. Again, it’s disappointing the DVD release doesn’t include the original opening.