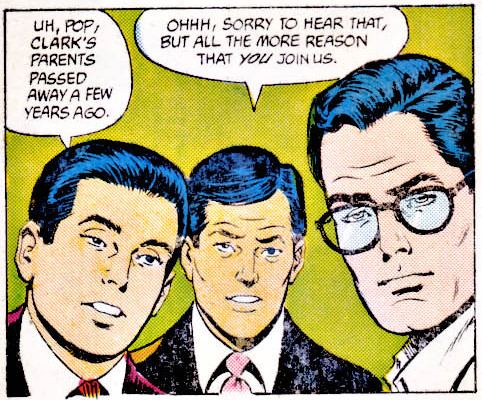 Tommy was one of Clark Kent’s roommates during his college years at Metropolis University. The other three were Dave Hammond and “Ducky” Ginsberg. The latter was a (stereotypical) hippie, reflecting the 70s setting by which point in time Clark’s college years were set. The roommates first appeared in “Superman: The In-Between Years.” This was a series of occasional backup stories that ran in the early 80s “Superman” titles, delving into Clark’s little-seen college years.

Tommy was accustomed to big-city life, and fairly tolerant of Clark’s “mild-mannered” behavior. Tommy was also a big fan of the Metropolis Metros baseball team. His parents are shown living in Vietnam as doctors. One story (“Superman” #370 in April 1982) shows Clark, as Superboy, helping them avoid being captured by Viet Cong troops. As far as I can tell, this is the only story that shows Clark involved in the Vietnam War, besides the infamous “Superman” #216 from 1969 (this blog sums up that story). Unlike that Superman story (which came off as propaganda), Superboy here merely rescues Tommy’s parents and take them to safety, without doing anything further.

The 1985 miniseries “Superman: The Secret Years” shows Tommy stayed as Clark’s roommate throughout his time in college. At one point, he tries consoling Clark when the latter’s feeling depressed over breaking up with Lori Lemaris. (This was set during the Lori/Clark flashback in 1959’s “Superman” #129.)

Tommy also sits with Clark at commencement. Clark, having no family (per the deaths of Ma and Pa Kent just after he finished high school), opts to take up Tommy’s offer on having a celebratory dinner with him and his parents, who’re visiting from Hong Kong.

What became of Tommy after graduating Metropolis University is unknown. The John Byrne revamp to Clark’s past changed much, but largely left his college years intact (sans Superboy), including Clark having dated Lori.