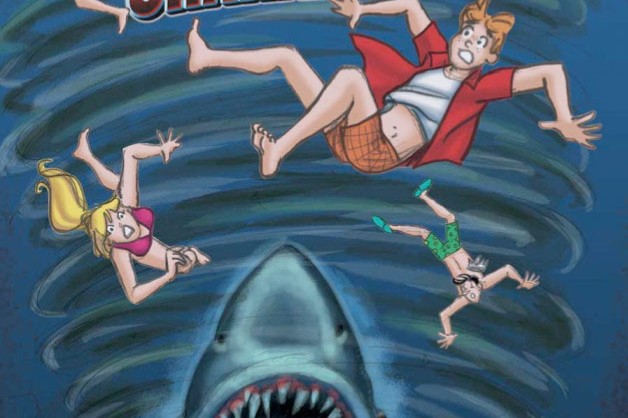 What this post’s headline says, folks. The next intercompany crossover for Archie Comics will be the Riverdale gang facing off against their very own “Sharknado.”

Not many details about the crossover so far, besides that it’s being written by the director of the “Sharknado” films himself, Anthony Ferrante, with art by longtime Archie artist (and Kevin Keller creator) Dan Parent. It’s due out on July 22 as a one-shot story, which is the same date that “Sharknado 3” debuts on the SyFy network.

“Sharknado”‘s become the biggest success among the truckload of SyFy’s B-movies, most of them involving some sort of animals attacking humans. In this case, a “Sharknado” was a tornado that swept up and dropped sharks on an unsuspecting populace. I’ve yet to see any of the “Sharknado” films, but the first two films are available on Netflix.

As for how the Archie gang fend off this menace, given this comes on the heels of their (somehow) fending off the Predator, a bunch of sharks shouldn’t be too big an obstacle.