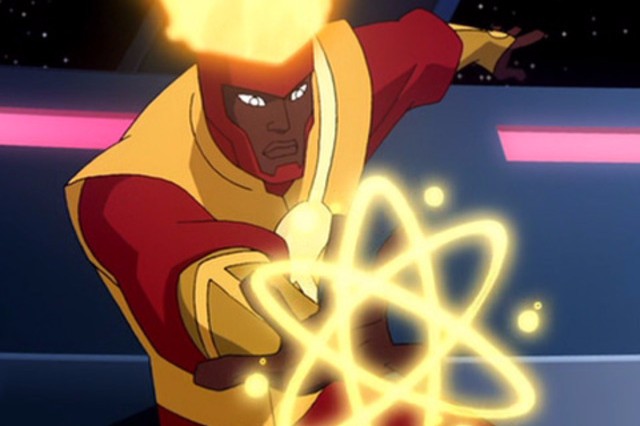 Jason’s backstory states he was a 17-year-old who grew up in Detroit and had a rough background. Not only did he have an abusive father, but Jason had also lost the job he was relying on to pay his way to college (and out of Detroit). Needing money, he accepted a job as a courier for a local thug. It was during one of his deliveries that Jason encountered the “Firestorm Matrix,” which was searching for a new host after the death of the original “driver” of Firestorm, Ronnie Raymond.

Struggling with his new powers, Jason saw the thug he worked for killed. Eventually, Jason got the hang of being a superhero, and had various adventures. One adventure saw him kidnapped by the Secret Society of Super-Villains.

Following the events of “Infinite Crisis,” Jason found the other former half of Firestorm, Dr. Martin Stein, who assisted him further with both heroics and his civilian life. Ronnie also eventually returns to life (long story—see “Blackest Night”).

Jason’s origin story was altered in 2011’s New 52 reboot. Both Jason and Ronnie are two students at the same school. They both become the two halves of Firestorm, with Ronnie as the “brawn” and Jason as the “brains.” Dr. Stein doesn’t seem involved beyond providing the cause of Firestorm’s origin. This would keep with the New 52’s marketing-driven youth obsession.

As Firestorm, Jason’s powers are vast and varied, including flight and vast strength/stamina. However, Firestorm’s most famous power is the ability to molecularly transmutate inorganic matter. While Jason’s gone through several co-hosts, the second person that makes up Firestorm can still mentally provide their thoughts to Jason.

“Batman: The Brave and the Bold” featured Jason and Ronnie Raymond as Firestorm. In this series, Ronnie is a dumb jock coach at Jason’s school, and Jason’s the one with physical control of Firestorm. Tyler James Williams voiced Jason.

Jason also appeared in the direct-to-video film “Justice League: Crisis on Two Earths.” He was voiced by Cedric Yarbrough.